Yup.  There’s a theme here.  Beer and bacon.  I don’t know how I got stuck with those in my head.  Probably because I didn’t want to have that gallon hanging around and didn’t want the bacon bits to be sitting in the fridge forever.  Nope.  We don’t eat them often.  In salads and for twice baked potatoes.  That’s about it.  Yup.  Bacon’s pretty much off our menu.  It’s NOT low in fat and is NOT good for either of us to eat.

Beer?  Not lately.  We have been on the scotch kick for the better part of the last 6 months or so?  In fact, I’ve had some tonight.  The typos have been laughable at the very least.  The only beer we’ve had in the house was for me to cook with.  LOL

When I think of beer and food I immediately think of Beer Cheese.  It’s an old family favorite that you can read about earlier this month.  I really do need to make sure I bring this home from work.  It’s really tasty and OH so good.  I don’t want to leave it for all the co-workers to eat.  It’s just too yummy for that.

But, it has been my inspiration for this recipe.

These vanished at work.  I mean…VANISHED!  And it was a holiday to boot, so I didn’t think they would be gone as fast as they did.  There was a skeleton crew the day after Independence Day.  I brought the dozen in.  By lunch half were gone.  By 4, when I leave, all but 2 were gone.  On a holiday.  When few people were in the office.  I thought that was interesting.  I ate one…with beer cheese.  They were yummy, if I must say so.  Which I must.  Cause they were.  And I’m not just saying that.  I’ve been told that.  A few times.

When I found out this challenge was beer, I did brain some storming of what I was going to make.  It was interesting to see what my brain would think up.  Here’s just a snippet of what I was thinking:

This are just a few examples of what my brain thinks of.

Beer ice cream even crossed my mind for a minute.  I even put the container in the freezer.  That just means I’ll have to make some other kind of ice cream.  Seems a bit of a waste to put it in there and not use it.  *shrugs*

Okay.  If this post doesn’t make sense tomorrow, it’s because I’ve been over served…by my own fiancee.  I think it has something to do with me not having lunch.  We had brunch at Bob Evans around 11 and that’s it.  Nothing until 5 for dinner.  Not even popcorn, which you’d think I would have eaten due to the large quantity of the beer bacon caramel corn I’ve made.

At one point today S said to me, “Are you bored?”  Um…no.  I just had an idea of what I was going to make thinking you were off yesterday.  Since you were NOT off yesterday, I’m making up for lost time.  I still need to sweep and mop the kitchen.  Dust and vacuum the rest of the house.

I need to learn how to get into a schedule for chores.  I never had any when I was a kid…regular chores that is.  Not like the weekly kind.  There was the do-this-today type thing and the this-needs-to-be-done-this-week type chores and the mass cleaning for entertaining and parties.  No regular type chores.

Wow.  I’m really bouncing between topics today.  I think maybe I should just close this post and get on with the recipe?  Yeah?  Okay.  Sounds good to me too.  I’m tired of hitting the backspace button anyway.  I’ve probably hit it about 100 times already in the past hour…cause I’m drunk.  And drunk posting is not really fun.  Maybe funny if there’s a weird typo or something like that, but for now it’s just irritating to hit the backspace forever.

So, I hope you enjoy my recipe.  They are very tasty muffins and I will probably be making them again.  They are easy and, well, I have beer left.  LOL

Sadly, I didn’t take any pictures of making these muffins.  *sigh*  I get in a hurry or get distracted by S sometimes and forget.  I think I was cleaning on this day and just forgot.  If I am running out of time and S is home soon, I have a tendency to forget as I’m in a hurry to finish before he gets home.  Um…rambled on a bit more than I thought.
ANYWAY 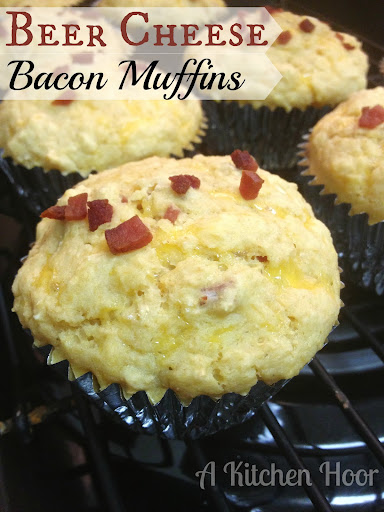