Mine wasn’t…perfect… Can I just say I HATE my oven? *note to self get oven thermometer* I don’t have a plated picture of this. We devoured it even though it wasn’t perfect. 1.5 hours in my oven curdled it. But it was YUMMY! I will be experimenting with round 2 today. 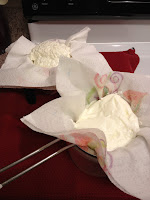 I started out with 1 pound of nonfat yogurt and 1 pound of nowfat cottage cheese.  You drain both.  The yogurt will need to drain for about 10 hours or so to make yogurt cheese (yield 1 cup).

While these are draining, I made the crust.  I preheated the oven to 325 and then crumbled one box of World Table chocolate wafer cookies in a food processor.  Then I added 2 T of Parkay butter spray and processed until a dough formed.  This was pressed into an 8 inch spring form pan.  The crust went into the oven at 325 for 8 minutes and then allowed to cool completely.

While the crust was baking, I put 1 1/2 cups of cranberries into a small saucepan and added 1/2 cup of sugar, and 3 tablespoons of water.  The recipe calls for 1/4 cup of raspberry liquor, but I didn’t have that.  I improvised.  A co-worker gave me some raspberry tea cordial (I really don’t know what that is.  I’m guessing it’s raspberry tea brewed and added to everclear?)  So, I used that with a few drops of raspberry extract.  Not too much to make it overpowering.  I brought this mixture to a boil and then simmered until the berries popped open and the syrup thickened.  I removed the pan from heat and once it was cooled I processed it until smooth.

Once the two were combined, then I added 1 tablespoon of grated orange zest (which I ALWAYS have on hand…), 1 tablespoon of vanilla extract, and 3 large eggs; beating after each one until combined.  Then I pured the mixture into the prepared spring form pan with the chocolate cookie crust.  Then I poured the cranberry mixture over top and swirled it around.  This didn’t look so pretty when I did it.

Now, here’s where the directions will SERIOUSLY vary with each oven and it’s….let’s call them quirks.  The ATK directions say, “…increase the oven temperature to 500 degrees…Pour the processed cheese mixture into the cooled crust and bake for 10 minutes.
5. Without opening the oven door, reduce the oven temperature to 200 degrees and continue to bake until an instant-read thermometer inserted into the center of the cheesecake reads 150 degrees, about 1 hour and 30 minutes, rotating the pan halfway through baking.”

Yeah, not so much with my oven.  It’s craptastic.  After the 1.5 hours, the cheesecake was curdled.  When I rotated it at the halfway point, there was still considerable jiggle.  *shrug*  That’s why there’s no gorgeous, plated piece of cheesecake.  However, this is what it looked like AFTER it was cooked.

It wasn’t so much creamy, but it did taste good.  The cranberry topping was the perfect combination of tartness and sweetness.  Of course, now I have half a bag of them in my fridge.  I may just make the syrup and freeze it for later.

I’ll be trying to perfect this method with my oven…*sighs @ electric*  Such is the life of a cliff-dweller.

by A Kitchen Hoor

For the yogurt cheese

For the yogurt:
Spoon the yogurt into a strainer lined with several layers of cheese cloth or paper towels. Allow to drain at least 10 hours; making a thick cheese.
For the Crust:
Preheat oven to 325.
Process the cookies in a food processor until they are a fine, even crumbs. Add the Parkay butter spray and process until a dough forms.
Press the chocolate crumb dough into an 8 inch spring form pan making sure to press crumbs 1/4 of an inch up the sides. Bake 8-10 minutes or until the crust becomes fragrant.

Preheat oven to 500.
Place the cottage cheese into a strainer lined with paper towels and allow to drain 30 minutes. Combine 1 cup of the prepare yogurt cheese with the drained cottage cheese into a bowl of a food processor; process until smooth and no lumps appear.
Cream the cream cheese with 1 1/2 cups of sugar in a medium mixing bowl with a hand mixer. Add 1/3 of the cottage cheese mixture until well blended. Add remaining cottage cheese mixture and continue to blend until smooth.
Add the eggs, one at a time; beating between each addition. Add the extract and orange zest and blend until combined.
Carefully spray the sides of the spring form pan with cooking spray, being careful not to disturb the crust. Pour the filling into the spring form pan.

Place cranberries, sugar, liqueur, and water in a saucepan; boil.
Cook 8 minutes or until cranberries pop and mixture is syrupy. Cool 20 minutes. Place mixture in a food processor; process 1 minute or until smooth.
Spoon cranberry mixture over filling; swirl together using the tip of a knife. Place spring form pan in a 13 x 9-inch metal baking pan.
Place the cheesecake in the oven for 15 minutes.
Without opening the door, turn the oven down to 200. Rotate halfway through the cooking time; somewhere between 20 and 45 minutes depending on your oven temperature. The cake should register 150 when it’s finished.
Remove from the oven and run a paring knife around the rim. Place the spring form on a wire rack and allow to cool, running a paring knife around the edges every hour or so for approximately 2-3 hours.
Wrap in plastic wrap and allow to chill complete in the fridge, approximately 3 hours.
Powered by Recipage
0 Shares
Share
Tweet
Pin
Yum
Share
Flip
Share
Reddit