I hope you all had a Happy Thanksgiving.  Ours was quiet as usual.  It’s always just the three of us; S, me, and the Missy girl.  She was extremely excited at the sight of our turkey.  You see, the smallest we could find for the two of us was a 12 pounder.  Seriously.  12 pounds.  2 people.  You do the math.

Not that I don’t LOVE left over turkey.  Soups, salads, SANDWICHES!  Is it just me or do you just want to dip the turkey in mayonnaise and eat it?  No?  Okay.  Guess it’s just me.  But the sandwiches.  Those are the best!  We made hot browns and still had plenty left over for this soup.

Now, I don’t know about you, but after all is said and done, I simmer the carcass to get every last little bit of brothy goodness out of the remaining meat and bones.  Considering this was the best turkey I think I’ve cooked, this made the best broth.  It was so good, I had to use it pronto!  SOUP!  I have to make soup with this yummy, golden goodness.

So, I did.  And it was easily thrown together in the slow cooker, simmered while we were at work, and we came home to tasty turkey soup that was delicious, low fat, and filling.  Again, I’m always worried about making soup to supper with S.  Wow. That’s alliteration.  Anyway.  He’s said before that soup is not enough for supper, but this time, it was hearty enough!  A bog bowl of this and some nice crusty bread and you’ve got yourself a good meal for a chilly Fall night.

I made it super easy and quick.  I don’t know about you, but even though I’m a morning person, that doesn’t mean I’m going to chop a bunch of fresh veggies for a soup first thing in the AM.  I’ve grown quite fond of the frozen vegetable selection for the slow cooker meals I assemble.  They’re relatively inexpensive, there’s a good selection, and these veggies were the perfect size and combination for my minestrone.

I purchased the California style Birds Eye frozen vegetable package.  Two of them, actually.  I wanted a TON of vegetables in this soup.  I also added some green beans and corn.  It needed a bowl full of veggie goodness.  I was going to do rice, but gave S the choice of rice of noodles.  He wanted noodles.  They were the perfect choice.  I think rice would have been lost in all those veggies.  No yolks is our noodle of choice and they’re tasty in the broth.

I purchased some zucchini to put in the pot, but completely forgot about them.  In fact, I think they’re still in the fridge.  I should make them with the pork tenderloin tomorrow.  Just wait for this recipe.  It’s going to be YUMMY!! 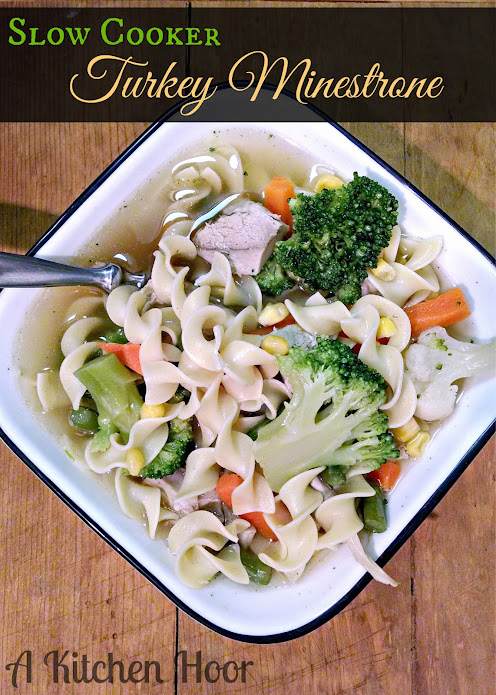