We used to have wilted lettuce salad all the time when I was growing up.  It was usually a side dish to the meal, but it was something we had often.  It was always tasty and yummy.  So, why haven’t I made it before now?  Well, S has this thing where he says he doesn’t like vinegar.  I get it.  Vinegar is kind of pungent.  If there’s too much it can be a bit strong.  When he said that to me, I knew this would have to be something I make when I’m eating by myself.

On a whim, I just thought I’d make it and see how it goes.  I was hoping the scallops would be a distraction enough for the vinegar dressing.  Oh.  How wrong I was.  He caught a whiff of the dressing as it was cooking and I got a little worried, but when I assembled it all and we sat down to eat, he almost ate the pattern off the plate.  It was delicious.

It’s been a while since I’ve had something turn out almost exactly the way I hoped it would.  The crispy bacon accented the spinach with the sweet and tangy dressing.  The succulent scallops accented the sweetness of the whole dish and the eggs were a perfect, rich accent to the whole thing.  Just delicious.

If you have the eggs ready, it comes together in minutes.  You can have it on the table in less than 20 minutes.  Perfect for one of those days when you get out late, traffic is horrible, and you just want to throw something together.  I had a week of those this week.  I’ve had a week of wanting to DRINK dinner this week.  I truly am getting tired of giving birth to Colombia every few months.  It’s really getting tiresome.

I start out on what I THOUGHT was a the perfect way only to find out it was muddle and confused.  The spending wasn’t exactly as described and there were grey areas.  Great.  Start over… on Tuesday…and it’s due FRIDAY.  YIPEE!  *sigh*

This is how I learn.  I learn to create reports that aren’t standard and aren’t items we’ve reported on usually.  I learn how to modify the data to generate these reports.  I start out one way, get in the thick of it, then have an epiphany and modify it to analyze the data a different way.  Sometimes another level of eureka hits, sometimes not.  I have the same moments in the kitchen sometimes.  Those are even more fun.  I would just really really really like to be done with this stupid program.  Please?

Salad.  So, we have salads on Tuesdays.  Used to Caesars, but S wanted to change it up.  So I’ve been trying to make new types and styles.  We both love scallops so I’ve been playing with those for our Salad Tuesday.  The following Tuesday after having this, he thought I was making the same thing again.  This from the man who doesn’t like to have the same thing so soon.  Really?  You want that again?  Really?  Okay.  Lesson learned.  LOL

So, I’ll be making this again.  Actually, I’m making something similar this week, but not exactly the same.  This one has a twist to it, so stay tuned. 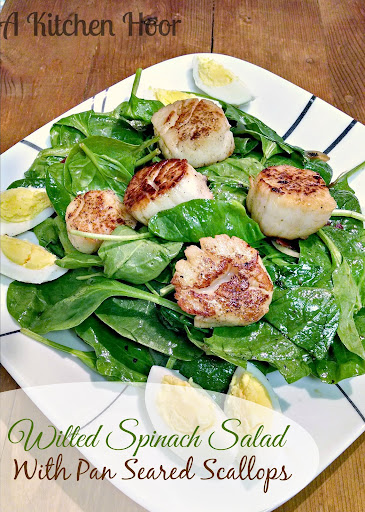