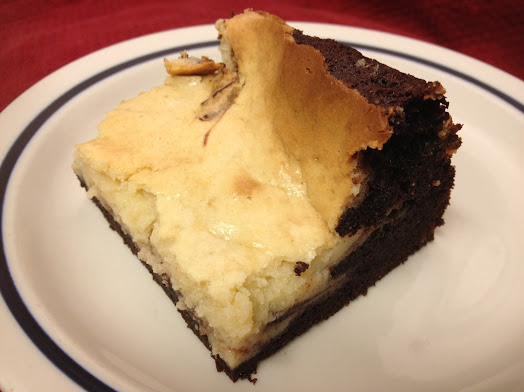 Baileys Swirl No Pudge Brownies are sweet, fugdy, cream cheesey goodness! One box mix and a few pantry ingredients and these beauties are in the oven quick!

We have a busy weekend.  So busy we took Monday off.  Granted there’s a REASON we took Monday.  Hopefully, I’ll get to that post at some point…

Friday S sends me an email:

Me: No…What day do you want to go?  Sunday?
S: Lets go sat and not hike this weekend.
S:  Did you buy the tickets?
Me: Bought

So…no hike this weekend.  I thought I’d spend more time in the kitchen today.  Yeah not so much.  After wandering around for an hour at the Super Pet Expo looking at all the different chihuahua clothes – OH!  Can I just say…for all you people that put your pets in those carriage type thingies.  If you’re dogs are TOO BIG! Please DO NOT cram them there!!  If they don’t want to go in there…DO NOT FORCE THEM!  OMG!  We sat in the parking lot watching two old ladies cram two bichon frise type dogs into a carrier that was obviously made for ONE dog.  It was horrible!  Dogs are not toys.  Would like to be crammed into an airline toilet with two people?  That’s what it looked like!

There’s always several booths of “gourmet” dog treats.  I swear I could TOTALLY get into making these for fun.  I had a blast making the one batch i did bake for Missy.  The spinach sweet potato ones.  She loved them!  They’re so easy to make.  MUCH easier than any human cookie.  I tried to find a bone shaped cookie cutter.  You’d think THAT would be the place to find one.  Nope!

Where was I?  Oh yeah!  Either Monday or Tuesday we stopped at the store on the way home for ice…and I grabbed a few other things for baking this weekend.  One of them happened to be No Pudge brownie mix.  If you haven’t had the No Pudge  brownies, they’re pretty good for no/low fat.  They have a few different flavors, but I always grab the original.  That way I can flavor it up the way I want.

On Friday, we made a stop at the liquor store.  Muahahahahaha *cough cough*  Sorry.  We opted for Scotch but I got some Jamison’s and Baileys for cooking.  Yeah…that’s it.  Cooking.  *wink wink*  I was thinking Irish Coffee Cupcakes.  We’ll see what happens.  I’m also thinking Hazelnut Latte Cupcakes, too.  So many cupcakes floating through my mind!

We have been having ice cream for dessert as of late.  But, we ran out on Saturday.  So I say, “We have brownie mix.”  And I think to myself, “and cream cheese and Baileys for a nice Irish cream swirl.”  And that’s what I did! BUT in an unconventional manner.

I processed 1/2 cup of fat free cottage cheese with 1/4 cup of egg substitute until smooth.  Then I added 1 tablespoon of Baileys and processed until blended.  I added this to the brownie mix along with 1 teaspoon baking powder.

I used a hand mixer to combine the cottage cheese mixture with the brownie mixture.

Then I combined 8 ounces of low fat Neufchatel cheese (cream cheese) with 1 1/2 cups of powdered sugar, 1/4 cup of egg substitute and 2 tablespoons of Baileys.

Now here was the hard part.  The brownie mix is UBER thick.  I usually use a rubber spatula to spread it out into the bottom of the 9 inch pan I use.

Then I poured the cream cheese mixture on top and attempted to swirl the batters together.

Yeah.  I’m not the best at swirling.  I have a tendency to OVER swirl.  But the brownie batter is SO thick and the cream cheese mixture wasn’t, that it just made it difficult.

Okay…this is a work in progress.  This is the first time I’ve played with this batter other than just following the box.  So this will be attempt one at Lord knows how many to make low fat cream cheese swirled brownies using No Pudge brownie mix.

The edges puffed up A LOT.  But once they cooled, they weren’t as puffy.  I thought that was interesting.  They were also very fudgy.  So they were like cream cheese topped fudge brownies.  Yummy, they were!!

Being as they were so fudgy, they were a little difficult to cut.  They were not, however, difficult to eat.  They were sweet, fugdy, cream cheesey goodness!  I will definitely be doctoring this recipe to make them better, but as they stand, not to shabby for a first attempt.