Biscuit Ebelskiver are surprisingly simple to make but taste perfectly delicious.  They’re popable bites of buttery goodness that is tender inside and crispy outside. 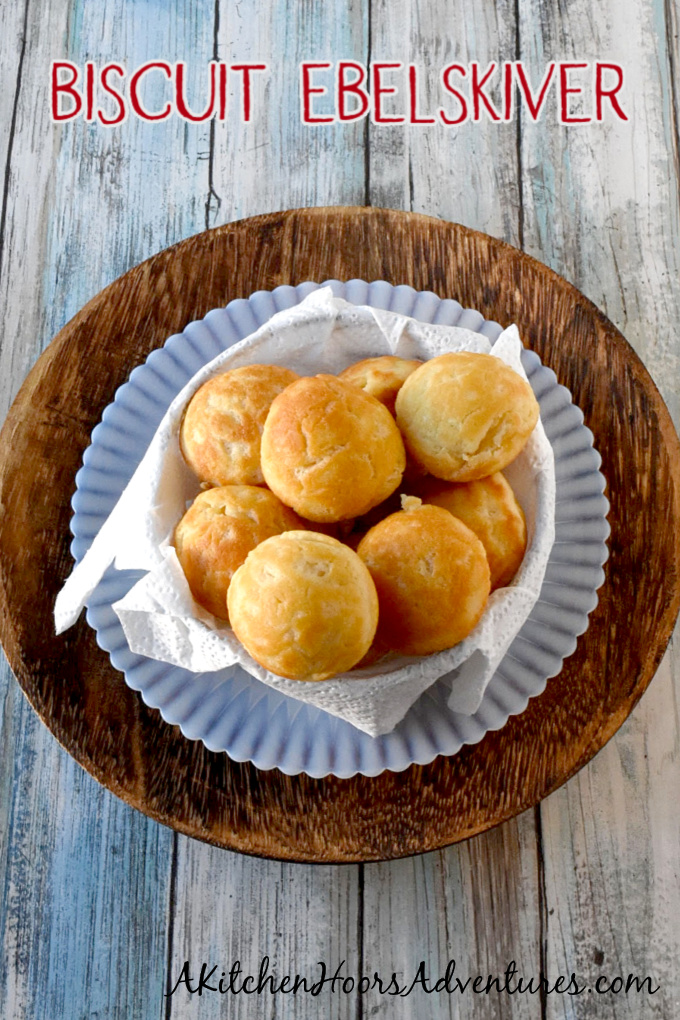 I am just going to preface this right here. These biscuit ebelskiver are addictive. Seriously. I’m sitting here writing this and they’re calling my name. “Chriiiiiiiiiiiiiistiiiiiiiiiiiie! You know you want to eat the rest of us!”

The ebelskiver pan was part of a blogging event. They were a sponsor and I jumped at the chance to get one. I had been wanting to get one of these pans for a while. I’m sure no one else wanted this pan, but I sure did. And I am enjoying it immensely!! However, life gets in the way and I don’t get around to making all the recipes I want. And, well, I procrastinate. I’m just going to confess that right up front. For example, berry week that I just participate in? I had two. TWO recipes made before the event started. Sadly, I had to back out of one day because the strawberries were all moldy after a week. A WEEK! WT…. For those that don’t know, I’m working from home. Most would think that’s more relaxing. I don’t have the long commute and mile and half walking to do every day. But, sitting there in the chair all day is more exhausting. It’s focused with few breaks. When I’m finished working, I just want to take a nap. So, I bailed on the hand pies because my strawberries weren’t good, and I was just tired. Oh so tired.

For this week, I had a few recipes under my belt. Three to be exact. I just had to make two but wound up remaking one of them. The hash. I needed there to be more hash! The eggs were too big for the amount of hash I had. So, I made it twice. Not that we minded. It’s so delicious. I had to make the sausage egg and cheese grits and these ebelskiver. Both of which turned out better than I could have even though they would. I even saved half the grits so I could have them next week. And will definitely be making more grits to have for breakfast while I’m working from home.

Here’s how my day played out. I had a meeting at 9:30. Then another invite came in at 9:41 for 10:15. Really? Talk about poor planning. And then she didn’t even show up to her meeting! Said it would be rescheduled but it wasn’t. We just showed up and she said she couldn’t share what needed to be discussed. Whatever. Then I had another meeting at 230. That was okay. And then I worked on the list of training and trying to trim it. I was finished at 4. Came upstairs and photographed 2 recipes. It would have been three but the third one just wasn’t very photogenic. I’ll have to remake that one and try it again. Which sucks because I kept that one in the fridge way past it’s prime so I could photograph it. And it just didn’t look the way I wanted to. Oh the irony.

I cleaned a TON of leftovers out of the fridge, walked the dogs, started laundry, and then started these biscuit ebelskiver. Y’all these suckers take no time at all to make. I cannot stress this enough! I mean, I filled the wells, let them cook while I was doing dishes. Turned them over. Ran upstairs to put the lundry in the dryer. Took those out and refilled them. Finished washing dishes. Turned those over. Sat down for a few minutes to start this post, and then they were finished. Granted, I made a half batch.

But It just goes to show you how these are mainly hands off. Just keep your pan on medium heat and you’re good. You can let them cook. In fact, you SHOULD let them cook because you want the inside to be cooked through and not pasty. That makes them un-addictive? Is that even a word? Whatever the opposite of addictive is. Despicable? Who knows? You get my point.

But these are addictive. They’re oh so buttery. The inside is tender and perfectly biscuit like. The outside is slightly crispy and even more buttery. There’s a theme. Butter. And these are totally popable biscuit bites that you and your family will love.

You split them open and there’s a delicious little pocket to hold jams, jellies, gravies, or whatever else you want to fill it with. They’re the perfect little biscuit bite for your brunch bar or breakfast board.