A wilted spinach salad gets a makeover with the addition of pan seared scallops.  BLTS Salad has the sweet and sour of the wilted lettuce salad with tangy tomatoes, salty bacon, and sweet scallops.  It’s a great dinner salad for any night of the week. 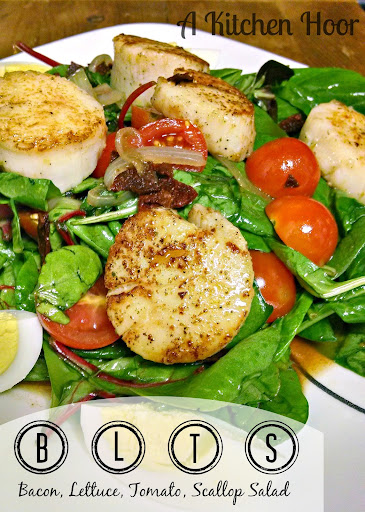 I told you I was going to do a variation of the the  wilted spinach salad, right?  Yup.  This is it!

I was so floored that S loved the other salad and wanted to have it again, I thought we could do that, but with a twist.  We both said more bacon.  It’s turkey bacon and NO not the HORRID bacon bits.  This is @Butterball Turkey Bacon.  I like turkey bacon.  It’s crisp, it’s not too salty, and it doesn’t give me heart burn.

This time I crisped it up in the microwave and chopped it smaller than previously.  While we both agree more bacon was necessary, we also both agreed that smaller, crumbled style bits of bacon were what was needed to make this type of salad better.  This lead me to make it crispier in the microwave.

The whole bacon and lettuce thing lead me to the BLT salad.  I made a BLT bread salad once from Cooking Light.  I know, this isn’t bread salad.  But I thought, “If you can make a panzanella style salad in BLT format, why can’t you make a wilted salad in the BLT format?”  You can.  I did.

And it was good.  And we ate it.  The tomatoes add nice color and flavor.  They play off the sweetness of the dressing.  I accidentally purchased the mixed baby greens.  Ya know.  With baby kale and bok choy.  It wasn’t the same as spinach.  Don’t make the same mistake as I did and make sure you get the baby spinach.  I didn’t like the bitterness of the other greens in the package.  Ick.

You also need to make sure the pan is good and hot, but not smoking hot for the scallops.  They need a good amount of oil in the pan.  I use a ton of cooking spray.  We’re trying to do that low fat thing, so tons of oil isn’t really in our diet.  The nutritionist has said we can use all the spray we want, just not straight out oil.  Kind of makes sense, because we don’t measure the oil, but we’ll get tired of spraying the cooking spray.  Go figure!

A wilted spinach salad gets a makeover with the addition of pan seared scallops. BLTS Salad has the sweet and sour of the wilted lettuce salad with tangy tomatoes, salty bacon, and sweet scallops. It’s a great dinner salad for any night of the week.