These Buffalo Chicken Tacos with Blue Cheese Radish Slaw will knock your taste buds off! And your family will want these ALL time. Don’t say I didn’t warn you! 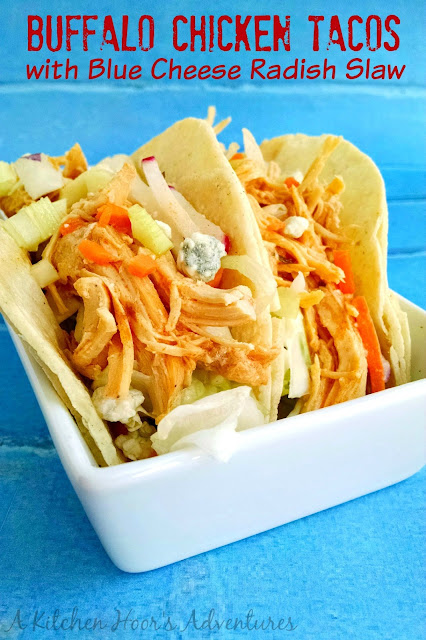 This is version three of these tacos. But only version two of the slaw. The first version of this chicken was horrible. I didn’t cut the wing sauce enough. It was really salty. It just wasn’t good. At all.

Not enough sauce. It was dry. The chicken wasn’t tender. It was #fail number two. And to be honest, I almost lost all hope of making this one happen. But it’s like they say, right? 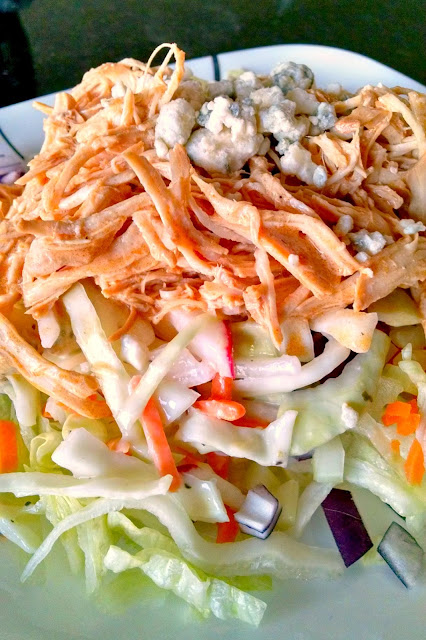 That night for dinner, I made mine into a taco salad. I didn’t feel like getting the corn tortillas out of the fridge and really wanted to see how it would work as a Buffalo Chicken Taco Salad instead of just tacos. And let me tell you. It was AMAZING! The cool, crisp lettuce with the spicy chicken. It was a, to sound cliché, a party in my mouth!

There’s this restaurant in Rochester, NY that I used to go to before the college hockey games called Zebbs. They had awesome wings and really great sauce, which they usually mixed wing sauce with ranch sauce to make it creamer and not as spicy or salty. I have adapted this concept and usually use it whenever I make anything Buffalo sauce inspired. 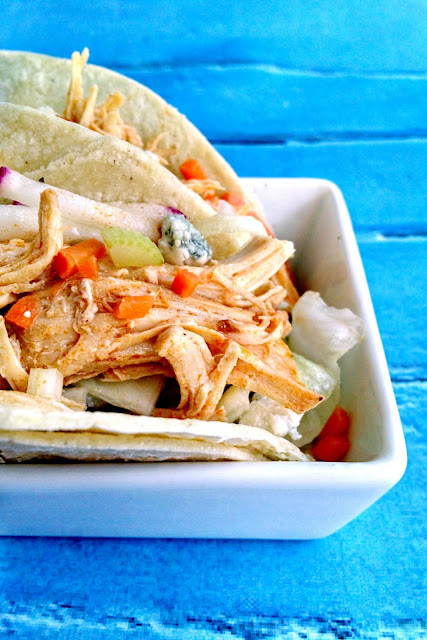 I did that here. I cut the wing sauce 1:1 with ranch dressing. Then slow cooked it with some chicken breasts. FINALLY! That’s the flavor I was looking for all along. The ratio was just perfect! It was plenty of sauce for the chicken to cook in and when it was all shredded and put back in the sauce, it was …

And the slaw? Well, that happened because I bought some HUGE and I mean H.U.G.E. radishes at the farmers market one day. They’re super crisp and slightly spicy. And if you wanted around on Pinterest enough you see that there’s slaw on some of the taco pics. 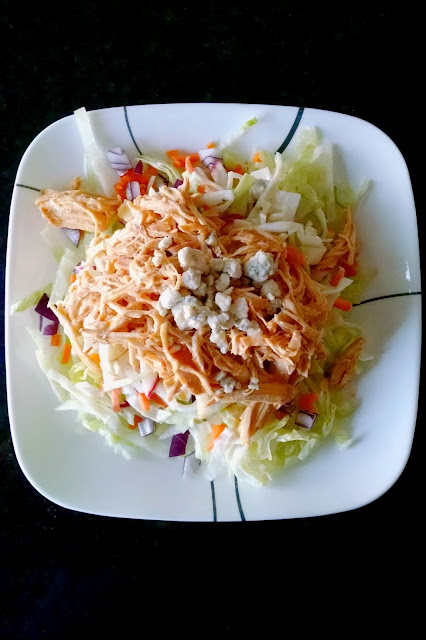 Then it just hit me.

Make this Radish Blue Cheese Slaw and put it on top of the tacos. The crispy radish with some carrot and cabbage would be perfect with a blue cheese dressing topping these spicy Buffalo tacos. And I was right. It was DE-licious.

Are you a celery and carrot person? We’re not usually celery and carrot people. But, to be honest, we eat most of our wings on delivery and not usually out at a restaurant. Since they’re usually served with celery or carrot sticks, I decided to mince up some to top the tacos with. This, along with the red onion and lettuce that we usually have, made for some super crunchy tacos. And not just from the taco shells crunchy, but vegetable crunchy. 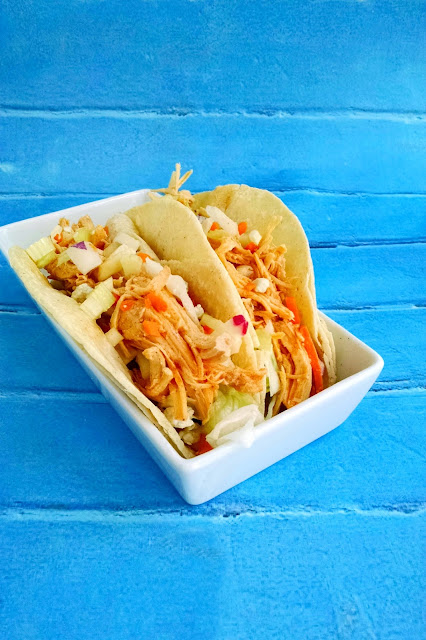 So, not only are these tasty, but they’re full of fun and healthy veggies! The rest of the ingredients? Well, they’re all low in fat or fat free where possible.

And, if you skip the taco shells and go straight for corn tortillas, they’re only 1 gram of fat per 2 tortillas. Not to mention, I think corn tortillas taste better than those taco shells. At some point, I’m going to oven bake some of these babies into taco shells. If you haven’t made your own baked corn tortillas, you’re totally missing out. Those are the da bomb! Super crunchy and so much tastier than the fried, bagged counterparts. Just saying. 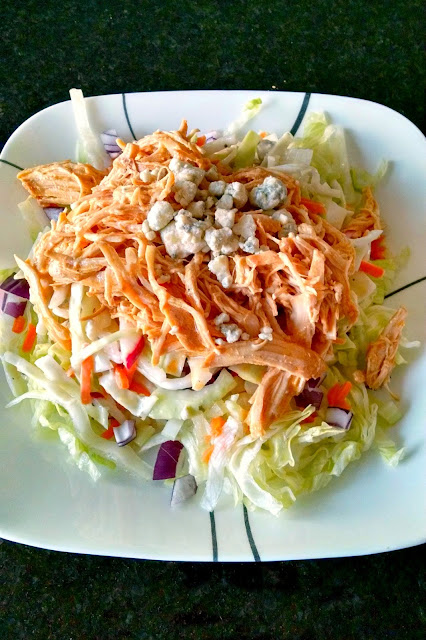 As you can see, I love my blue cheese! I put quite a bit on top of the salad. I love the creamy, tanginess of the blue cheese with the spicy flavor of the Buffalo sauce. They just complement each other so well.

And no, that’s not a lot of chicken. I’m monitoring my protein intake and am aiming for 6 ounces a day. Since this is a Tuesday meal and the Monday lunch wasn’t protein packed, I had 4.5 ounces of chicken. 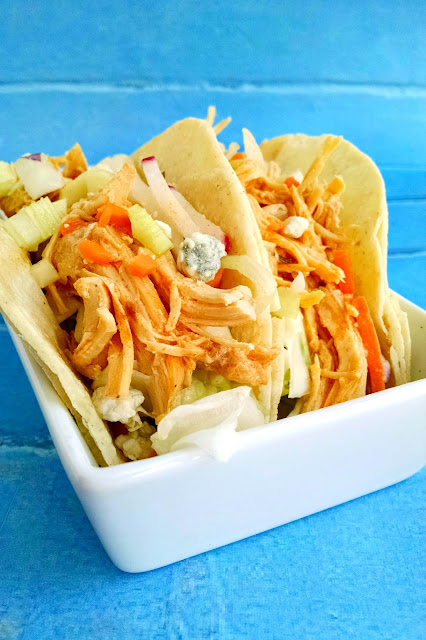 Okay, try not to drool while looking at this picture. It’s not easy is it? Those tender shreds of Buffalo chicken just resting there on top of the radish slaw and topped with crispy celery and carrot dices with blue cheese garnish. Honestly. Can you really resist that?

Okay, maybe if you don’t like blue cheese, so, use feta? Cheddar? Colby? Some other fave cheese? That would be the only reason NOT to make these. In that case, simply sub the blue cheese with ranch and you’re good to go!