I received one or more of the products mentioned for free using Tomoson.com. Regardless, I only recommend products or services I use personally and believe will be good for my readers.

I am having an affair. I am having an affair with a very popular baking catalog that shall remain nameless for the sake of this post. I read it cover to cover and mark all the things that I dream of owning and using every day. This includes any and all things to do with baking bread.

But, contrary to popular belief, I’m not rich. Actually, I don’t know who thinks that, but I’m not. I’m the pseudo sole bread winner of this family. The poor hubs, due the whole house buying thing, has not been able to get out of his crap job. I did not know that you have to remain in the same industry 2 years prior to buying a house or it looks bad.  And, well, don’t change employers in that time either.  Yes, I have a point and I’ll get to it. Stay with me here… 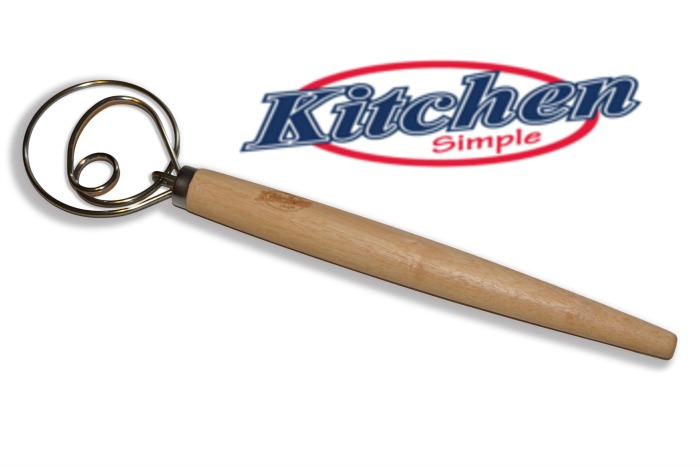 Since I’m not rich, have a tiny kitchen to hoor in, and would LUST at the chance to take an artisan bread class, I must continue to mark the pages of said catalog in hopes that one day I can justify purchasing the $800 in items I’d LOVE to own, cook with and use in my hopefully soon to be GOURMET kitchen.

I honestly want to be an excellent bread baker! Artisan quality with crisp crust and tender crumb.  I long for that chewy texture and sound of the crackle a good, quality loaf of bread makes when you squeeze it ever so slightly.  Okay.  Now I’m getting hungry.

But, I digress. I’ve seen those dough whisks and really wanted one. I thought it would be an excellent addition to the hoor’s gadgets and would make me a better baker. The last part I’m not sure about, but it is a neat gadget to have in the kitchen!!

Okay, here’s the sob story. I broke my stand mixer. I really do want to try one of those vids that tells ya how to fix it yourself, but I just don’t have the… space… to do something like that. It requires NOT losing tiny screws and apparently a large deposit of grease. Ew. 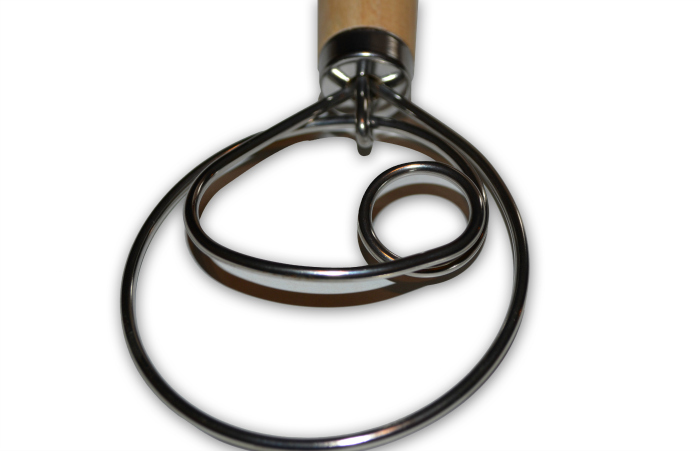 Since I broke it, I’ve been wanting to use my sourdough starter, but haven’t because I suck at kneading by hand. Seriously. I have NO. NO! upper body strength. I kid you not. I never have and I probably never will! So, kneading dough, braiding hair, ain’t gonna happen.

And for those that have a sourdough starter, you know it needs to be fed which requires a waste of 1 cup+ of this starter. I hate waste. I’ve talked about having issue with discarding of perfectly good food, right? I hoard leftovers and scraps of delicious bits for potential use later. S hates this. I know. But when you don’t have much, you savor every scrap and try to re-purpose or reuse it at a later date. It has come in handy frequently.

So, having to feed the starter and discard the cup kills me. I try to use it for pizza dough or bread, but sometimes, I just can’t because I don’t have a mixer to do the kneading due to my crapty upper body strength or lack there of. You see? This post DOES have a point!

Enter the Danish Dough Whisk from Kitchen Simple. I saw this on Tomoson and couldn’t wait to get my hands on it! I think I was initially declined, but wound up with one anyway. Don’t quote me on that.  But BOY was I THRILLED!! I’d seen one in those “other” catalogs and just drooled over them. Now I have one. And I LOVE it!! 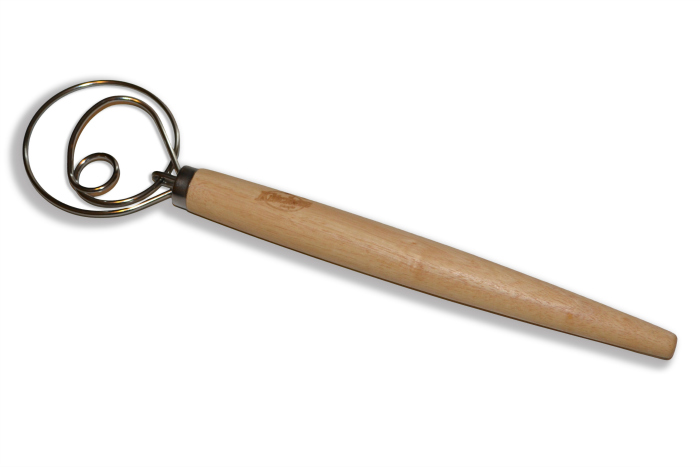 It really does great work to incorporate ingredients in the simplest of dough! I honestly haven’t used it for anything else. The batch of sourdough I made this weekend using this Danish Dough Whisk by Kitchen Simple was one of the best loaves I’ve made.  Yes, even though it spread out when it baked because I didn’t have a baguette form, it still had a crisp crust and really tender crumb.  This dough whisk really made easy work of the sourdough, no knead bread I made.

The sturdy handle and the strong whisk wires are made for even the thickest of batters and doughs. Granted, I haven’t tried the pizza dough that killed by stand mixer, but I’m sure it would make easy work of that dough.  When I used it for my sourdough bread, it incorporated the flour with the starter, water, and supplemental yeast with ease! Honestly. It took no time at all to have a nice, gluten formed dough ready to knead, rise, and bake for dinner. 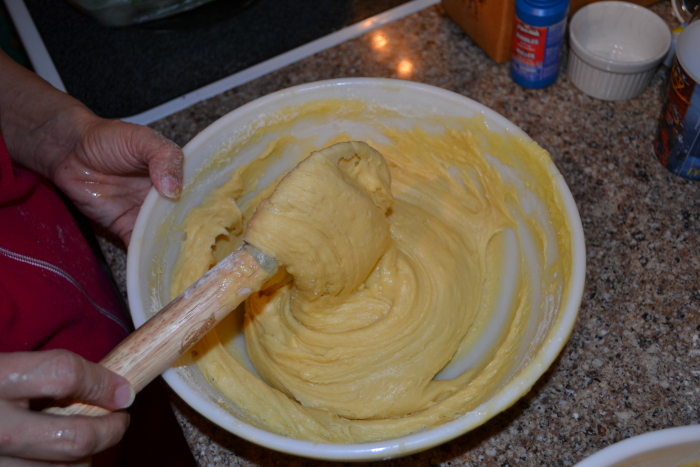 That’s not me.  It’s a promo pic from the campaign.  Just saying.

I didn’t really miss my stand mixer. It actually made me feel the dough and what it needed, which I miss by using the mixer. I was more in tune to what the dough felt like. Did it need more water? More flour? The whisk allowed me to feel that when I was mixing my dough. I would not have learned that lesson without this dough whisk.

It also allowed for easy clean up. Just a little rinse with some warm water and I was easily able to wipe away any remnants of dough there is. I usually wipe it clean then pop it into the dish washer for serious clean up. It’s that easy!!

Plus, the dough whisk was easier to pull out and use than my mixer.  It’s stays hidden in a cabinet because we have the TINIEST kitchen ever for a kitchen hoor.  All I had to do was open a drawer and voila!  Whisk in hand and ready to get to work!

If you’re looking for an excellent quality dough whisk that won’t break the bank, I highly recommend the Danish Dough Whisk by Kitchen Simple.  It’s handy, sturdy, and high quality!  It made a difference in my bread making this weekend.  I know it will make a difference in your bread baking!

I received one or more of the products mentioned above for free using Tomoson.com. Regardless, I only recommend products or services I use personally and believe will be good for my readers.