This Greek Style What Pizza tastes like a Greek salad only in pizza form.  With a wheat crust, it’s hearty and healthy even with all that cheese on top! 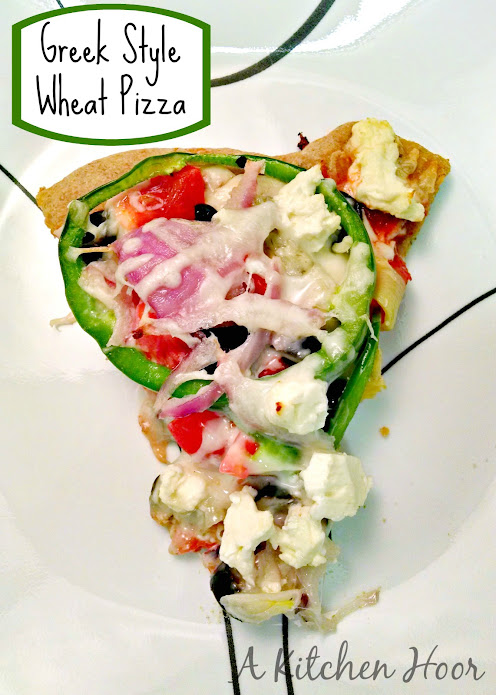 Ugh.  Pizza…well, I should say MY pizza doesn’t photograph well.  Again, there is something to be said for less is more.  Though it wouldn’t have been as tasty that’s for sure!!  S and I used to order Greek pizza from a restaurant not far from our old apartment.  It was mighty tasty!!  I don’t think it had artichoke hearts on it, but the onions, peppers, tomatoes, feta.  Yup.  All those were there.  AND they even had gyro meat on it.  Being as this is a #MeatlessMonday post, I skipped the gyro meat.  Besides, that’s not something I usually make, anyway.  Actually, NEVER made it.  Hmm…

I wanted pizza.  I wanted to make pizza.  And I did.  And it was good.  *snort*  Umm…yeah.  I did want to make pizza.  I wanted to make a wheat pizza crust.  No, it’s not whole wheat.  It’s part unbleached white and whole wheat.  So it’s half wheat?  Yes, apparently I’m punchy today.  My apologies.  I don’t think I slept well last night.  I had weird…and I mean WEIRD dreams.  So, I’ll try to keep my punchiness to a minimum.

But if I made pizza, it would have to be hearty.  That’s the thing with me and #MeatlessMonday; it’s gotta be hearty.  Otherwise, S would still be hungry, missing the meat, and then we’d have to stop.  Since I’m really having fun with it, and might be the front person for our department version of it, I need to keep it up.  PLUS I’ve registered as a blogger on their website.  Yup!  I sure did!!!  I’m not sure if I’m listed there yet.  I just sent my new and improved banner this past weekend, but I should show up there, soon!

I actually made a few suggestions for the health and wellness crew at work.  One was the #MeatlessMonday which, by the way, should be appearing ON Monday’s from now on.  I am heading the campaign.  Which means I need to do some research to be pitch it effectively.  Anyone have some good websites, suggestions, recipes, news articles not covered on their website?

The second was a brown bag it campaign.  There are an INSAGN number of people who eat out at work.  I think me and maybe 2 others bring lunch consistently.  Everyone else (16 in my office alone), goes out.  Lord knows who many in the whole department go out for lunch.  Just think of the 1 – money, 2 – calories, 3 – SODIUM, 4 – FAT, and 5 – cholesterol you COULD save by bringing lunch.  I LOVE bringing my left overs for lunch.  Like today.  Today, I have left over ribeye, steamed zucchini and DELICIOUS au gratin potatoes.  Stay tuned for that one.  They turned out PERFECT this go around.

The last thing, which is a HUGE issue in my building; the stairs.  We are not allowed to use the stairs.  It’s stupid.  It’s a secured building and I get that.  Really, I do.  BUT in today’s obesity epidemic, I would LOVE to be able to just go up or down as needed.  My suggestion?  Prescreening for a key.  OR have a sign in and sign out daily for a stairwell key.  That way, the keys are returned every night and you’ll know if one is missing and who has it.  I think it’s a good idea!!  We’ll see how that flies.  It almost took an act of Congress to get them open for a week last time.  *sigh*

I think, with recipes like this one, #MeatlessMonday will be easily accepted in our department.  I hope it is, anyway.  It’s a step in the right direction for heart health, and well, my waist health.  For the record, the cheese are all either low fat or fat free.

Oh and today is a follow up for the podiatrist.  I’m hoping for a cortisone shot to test out my feet this weekend on either a hike or a walk.  I’m tired of not being able to exercise.  *sigh*  This is LONG over due and I don’t think you can understand how frustrating it is…

Anyway.  I hope you try this delicious pizza and your own #MeatlessMonday campaign in your household or work!