A failed attempt at a green chile chicken stir-fry, this Green Chile Chicken and Rice Skillet dinner is tasty, creamy and with just enough spicy to make it delicious! 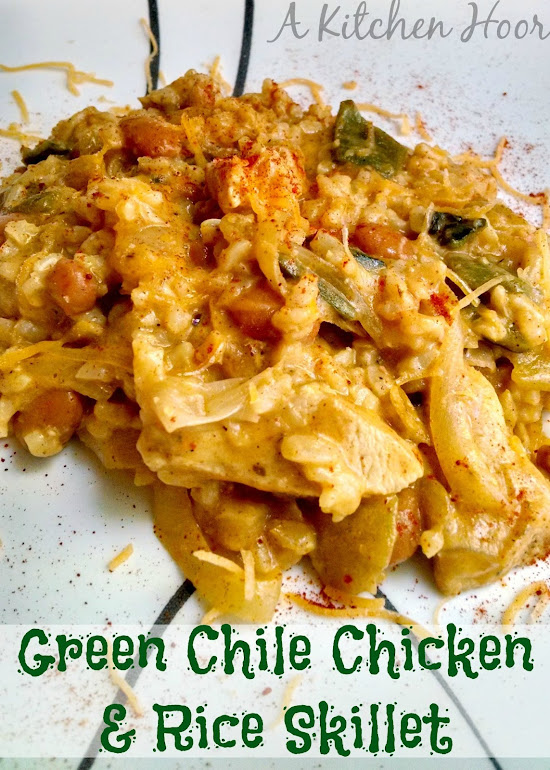 For those that follow me on instragram, you probably saw my #MeatlessMonday blob on a plate meal from this past Monday. It was delicious, but seriously was a blob on a plate. DID NOT photograph well. Which is why you probably won’t see a post about it. Just FYI.

This Green Chile Chicken and Rice Skillet looked pretty much like a blob on the plate. I didn’t think it would photograph well. It still sort of looks like a blob on a plate, but I made it all fancy with the garnishes of shredded cheese and smoked paprika. Smoke and mirrors. LOL

“How did it taste,” you ask? DELICIOUS! I thought it was, anyway. It was tangy, spicy, and creamy all at once. YUM! It was like a deconstructed green chile chicken and rice enchilada without the enchilada part. Why aren’t I calling it that? Because I feel that term is a bandwagon term and because it’s popular some people will put that in their title just to be foodie hip. I like to kick it olde skool and call it a skillet and not deconstructed.

S and I played hooky Thursday. I meant to whip up some taco seasoning to put on this, which I didn’t. I didn’t bother to get up and make some. Not like it’s difficult, which is why I basically put all the ingredients I would have used to make said taco seasoning in this dish in lieu of making a whole batch of taco seasoning. I have almost all the necessary herbs and spices to whip up a batch. Maybe this weekend. I need to make some anyway. We’re out and it’s so much healthier to make it from scratch than that salt laden stuff in the packet at the store. Just sayin…

I think I’ll be whipping up a few batches of herb and spice blends for flavors that I use all the time, or plan on using more. I’ve still yet to tackle a masala or curry blend that I truly love. Maybe once we find a place with a HUGE pantry and spice rack so I can have them all displayed out for me to see. Right now, there in like 4 different places and I can’t find them all. I know I’m missing some.

But this dish isn’t missing any. If you want more spice, throw in some jalapenos or some cayenne, but the poblanos, chiles and enchilada sauce were good enough for me.