Left over ham or thick cut ham slices are combined with sweet peppers and onions then baked with pasta in a cheese sauce. This easy and tasty Ham & Veggie Noodle Casserole is a freezer, pantry and fridge cleaner! Not to mention a delicious meal.

I was taking inventory of our chest freezer the other and came across quite a bit of ham from Easter. We always have ham for Easter. I’m sure not everyone does, but isn’t it almost a requirement for some households? It was always our protein of choice for that holiday.

I was cleaning out the freezer and found the ham. Since we’re planning on moving some time in the near future, I am trying to clean out the freezer, pantry and cupboards of kitchen ingredients. Essentially, cooking from my own “grocery store” so to speak. You’ve heard of closet shopping with your own clothes, right? So, I’m doing the same thing in my kitchen. You’d be surprised what you can create with the ingredients you have on hand.

Like this dish, for instance! I was thinking ham fried rice, German potato salad, ham mac n cheese; all pretty typical dishes. But then I thought of a take on the mac n cheese, throw in some veggies I would have made with the stir fry and voila! Ham & Veggie Pasta Bake was born! It’s just as cheesy as a macaroni and cheese, has delicious vegetables like the fried rice, and is hearty like the potato salad. I simply served it with some nice bread and dinner was on the table in about an hour. No definitely, not quick, but most of it was cooking time in the oven, so it’s definitely easy.

Now, a note about the ham. You see, we have vacuum sealer for food that we put in the chest freezer. I can’t tell you how much we have saved after the initial investment of this vacuum sealer.

So, yes, this ham was just as fresh and tasty as the day I sealed it and put it in the freezer seven months ago. If you don’t have one, I highly, HIGHLY, recommend them. We purchase discount meat that’s nearing its sell-by date, seal it, and eat it months later.

Sometimes it’s hard to resist but I really have to cut back on the meat I purchase.  We don’t want to have to move a bunch of frozen meat to the new house.  So, I’m trying  to cook from the freezer and NOT load it up with good deals on meat.

But sometimes, with holiday meals, the choices are for families or large groups of eaters. It’s just us and the dog. So, a 12 to 15 pound turkey really is just too much. Buy a breast? That’s almost as much as a whole turkey and you don’t get all that carcass for broth and meat for soups. Same with Easter. A smaller ham is more costly than the cheaper large hams. So, what’s a couple to do? Purchase the larger, less expensive option, and just freeze the rest. That’s how we came to have so much ham in the freezer. This is the first of four meals made with the left over ham.

And just look at how tasty this dish is! That’s a fork full of cheesy pasta, ham, and some veggies. Who can resist such tasty goodness? I know I can’t. I honestly can’t wait to have MORE ham to make this dish again. Your kids both big and little will love the flavor of this dish. And, if you’re like me, you’ll love the pantry/freezer cooking you can do to use up some left overs.

Now, with Thanksgiving just around the corner, what are you favorite recipes for turkey day left overs? Will you whip up something like this? 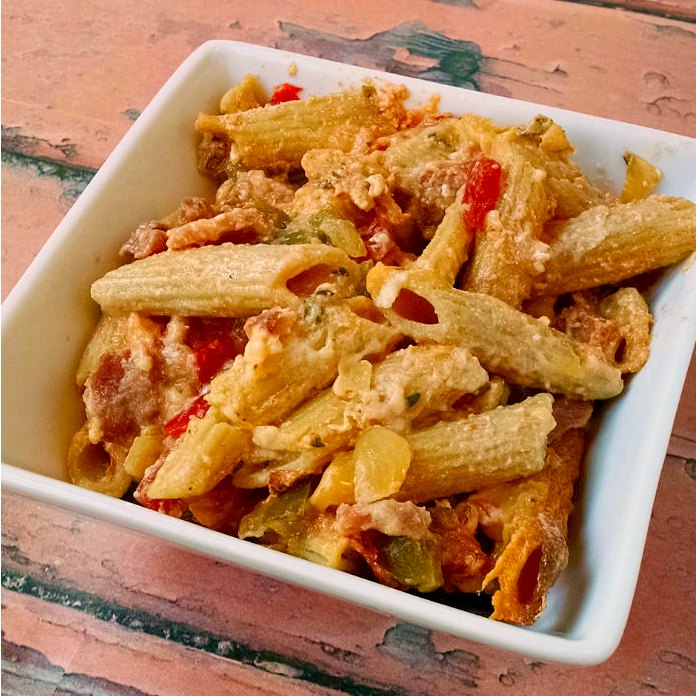 Left over ham, some vegetables, some pasta, and some cheese all combine to make this quick and tasty casserole.Prep time: 15 minutes
Total Time: 50 minutes
Serves: 6