Some call it Salisbury steak, my husband calls it Hot Hamburger. However, we both call it delicious and so will you! It’s a quick and easy weeknight meal. 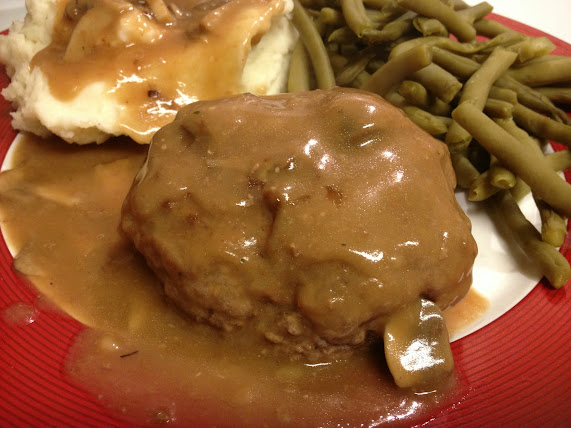 This is an S invention.  I always thought it was Salisbury Steak, but he INSISTS that is made WITH STEAK not hamburger.  *shrug*  There are some battles you just don’t fight….just sayin.

So, last night was supposed to be one of the nights we were going to start hitting the treadmill to build up our legs for hiking.  Yeah…I screwed up the menu on that one.  It should have been hot hamburger the night before when I was home.  Then I might not have messed up the artichoke olive dish, cause I would have put that in the slow cooker or at least the chicken and veggies part of that in the slow cooker and made a simple Alfredo sauce for the pasta.

I still might do that as an update to that fiasco.  Well, not fiasco, cause it did taste good.  It just wasn’t purdy.  And food HAS to be pretty for it to be successful….unless you’re the Garbage Plate in Rochester.  Yeah, you know what I’m talking about dontcha?  That yummy sloppy goodness of a hangover cure!  *drool*

Oh yeah.  Hot Hamburger.  I honestly have no idea why he calls it that.  I think his mom called it that, but I never really asked, I don’t think.  It’s just what he calls it.  I tag a recipe for Salisbury Steak, and then we just make this instead.  And it’s the FULL meal with optional veggies subs of broccoli or peas, etc.  But ALWAYS with mashed potatoes.  Cause mushroom beef gravy just wouldn’t taste the same on anything BUT mashed taters.

So, that’s where we start.  Cubing peeled potatoes and slicing mushrooms.

ALWAYS ALWAYS ALWAYS start your potatoes in COLD water.  If you start them in warm or hot water, then it will heat up too quickly and the outside will be mush while the inside finishes cooking.  This is 3 medium potatoes peeled, cubed, and rinsed in a saucepan over medium-high heat.

And this is about 3 cups of mushrooms in a medium pan over medium-high heat.

Yes yes yes the pan is crowded.  It’s okay with me.  I don’t drown them in butter cause this is healthy-ish cooking and they’re sauteing in about 2 T of ICBINB.  We cook them until they’re soft and slightly brown.  Then they get added to 2 cups of fat free beef broth mixed with 1/8 cup of flour to make a slurry.

This mixture just sits until the burgers are done.  We mix about 1 to 1 1/4 pounds of LEAN ground beef.  Lately, it’s been 88% from BJs, but we just switched to Costco so I’m hoping they have better prices on lower fat ground beef.  You could use turkey or chicken, but I don’t think it would taste the same.

Combine the ground beef with seasonings of your choice.  We usually use garlic salt.  Last night, I used TOO much garlic salt.  I KNOW RIGHT?  The person who RARELY if EVAH uses salt in cooking used too much!!  How can that be??  *swoons and faints*

Yup, crowded pan again.  We had this conversation last night:

S: Those are mini burgers.
Me:  Nope, those are NORMAL size burgers.  We just make SUPER HUGE ones.
S;  Nu uh.  A 6oz burger is normal.
Me:  Um…no it’s not.  4oz of protein is a serving size.  So MOST of those will be my size and if you want more you can just have two.

Once they’re browned and almost cooked through, add the mushroom mixture to the pan, bring to a boil and then simmer until thick; about 5 -10 minutes.

While they are simmering, your potatoes should be cooked and ready to mash or mix or whip or whatever your taters of choice are.

S usually makes this meal and I’m just the sous chef.  OH he does let me nuke the veggies of choice, too.  This time it was green beans.  We usually get the whole green beans and have two cans.  LOVES me some green beans.  nomnomnom
Once the potatoes and nice and whipped, it’s time to eat!

Some call it Salisbury steak, my husband calls it Hot Hamburger. However, we both call it delicious and so will you! It's a quick and easy weeknight meal.