Friday we plan on heading out to get some breakfast, elsewhere, and then head to some wineries in the area. Head to Waynesboro. If you go there and decide to do what we did, head to Waynesboro. There really isn’t ANY place to eat breakfast close by the resort. We drove all over God’s green Earth and wound up eating McD’s at Lovettsville, I think it was. It was a very frustrating morning.

We were lost. There was no signal. We couldn’t find ANYWHERE to get food. Just…do yourself a favor and head to Waynesboro. I think the most frustrating part for S was that there really isn’t a concierge type person at the desk. We just didn’t get answers from people there that were satisfactory. 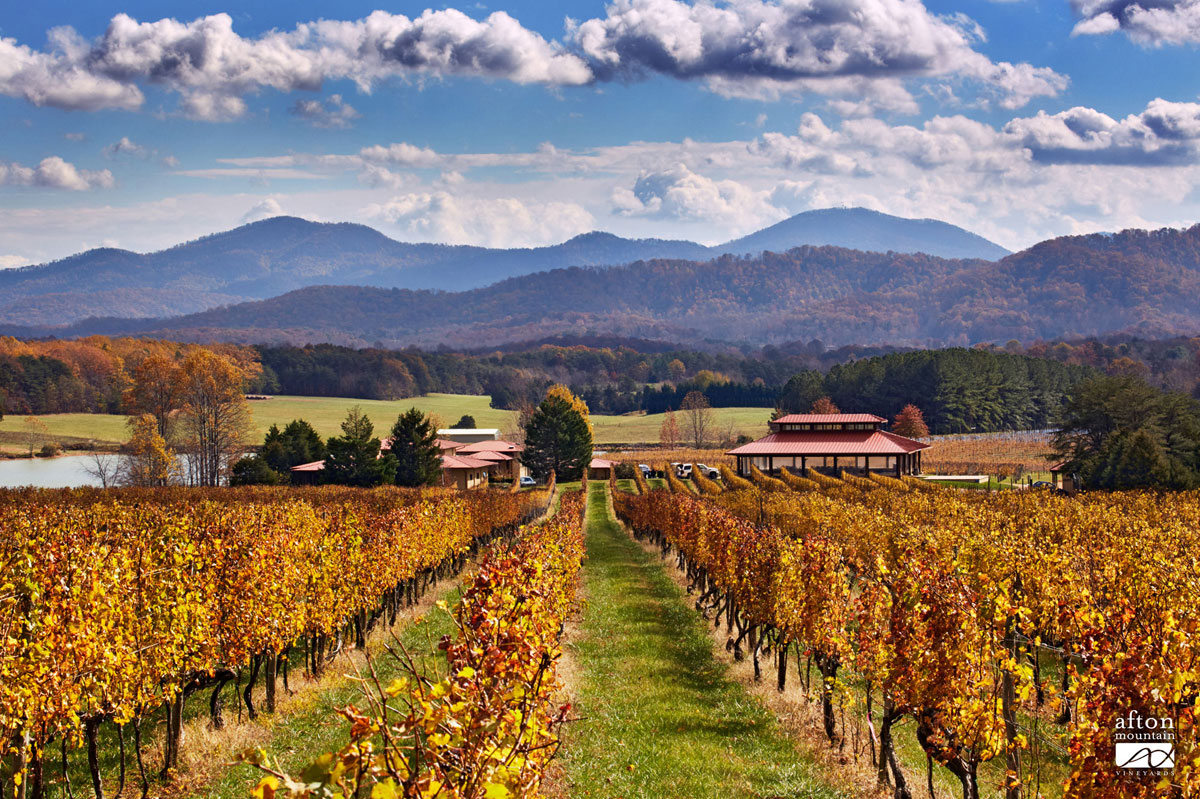 After breakfast, we headed to Afton Mountain Vineyards. We did a tasting there. They have some nice wines. They’re mostly new, which is okay. They were good tasting for new wines. We tasted the Petit Verdot, the Cab Franc, the Festa di bucco? and the cab sauv in reds. They were all good. I think I liked the cab franc the best. For whites, we tried the gewertz, steel chard, and estate reserve. I think we got the steel chard or the gewertz. I can’t remember and I’ll have to check. We also tried the mountain rose. It was rather nice for a rose. They’ve come a long way in the wine world and aren’t the cliché, box type wine I think of when I hear rose. 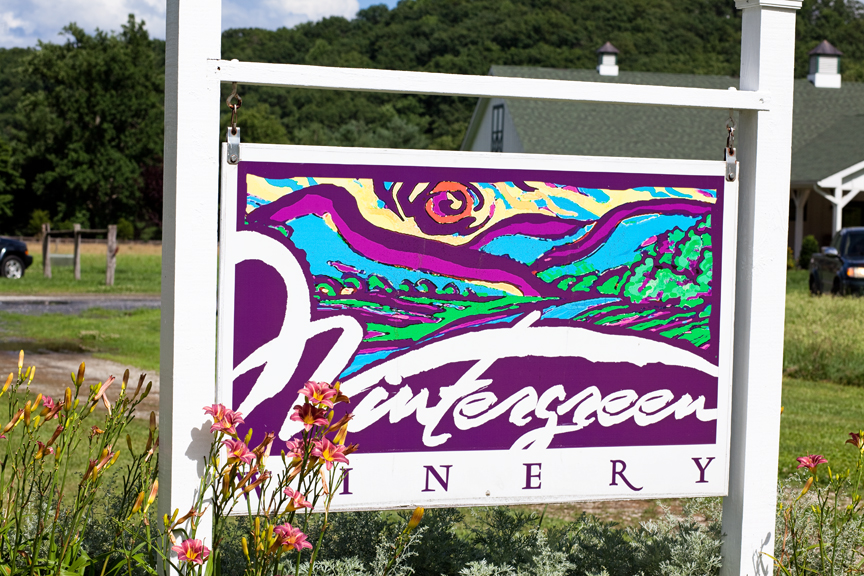 We drove to the Wintergreen Winery next. We tried all their reds and white and the raspberry wine. They were okay. Nothing to write home about. Their selection wasn’t bad for the price, I guess. They were just okay. Not, OMG we have to buy this right now type of wines. At least, that’s what we thought.

Then it was on to lunch, which was Devil’s Backbone Brewery. They have a cool logo! See what I mean? We sat down and order a couple of Gold Leaf Lagers. They were pretty good pilsners. I get so tired of all local brews of craft brews being more IPA style or heavier. There’s just not much in the way of craft or micro brews that are pilsner type beers. 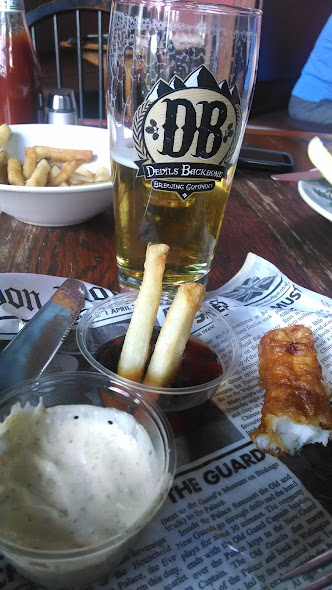 They had a yummy looking menu! I had the fish and chips and S had a sandwich. I think it was the Bone Dipper. It was yummy!! Mine was yummy! The fish was perfectly crisp and tasty. It wasn’t overcooked and dry. The batter was crispy and not greasy. They were fingers of fish heaven! S’s Sammy had tender beef with bacon and yummy cheese. The mayo was really tasty, too. They forgot my fries, so they brought us a whole bowl of them. Yum! I marinated some of mine in cider vinegar. Mmmmm.

We also hit some antique stores along the way. Dad does antique glass and S has gotten into the hunt for the deal. He actually found quite a few good deals. One of them was a small Heisey bowl for $3. It’ll sell for probably $15 or $20 depending. Heisey is VERY collectible and VERY pretty glass. We bought some of our pattern to collect, too. It’s pretty easy to find most pieces. There are a few harder pieces that I’ll sure will take some looking. I think we wound up with 3 or 4 bags of glassware. Some for Dad and some for us. It’s always fun to find good deals.

Then it was back to the room for…A NAP! We napped a lot while we were there. It was good napping. I think we both needed the rest. That’s for sure. But first, we stopped at The Market for some sammies and some chips to nibble on for dinner. They make some pretty good sandwiches at the market. It’s all Boars Head meats and cheese. The breads are good. The selection is decent and interesting. We ordered two Whiteouts to go. Of course, we got some popcorn. We can’t live without popcorn, I think. It’s our nibble of choice usually. Sometimes it’s chips, but mostly it’s popcorn.

After dinner we finally get to dive into THE CAKE! YAY! The red velvet cake that looked so pretty in the box. And looked like murder when we sliced into it. LOL It was so super tasty! The sweet but not too sweet butter cream, the moist cake, the tangy cream cheese filling. YUM! It was well worth it and we almost ate the ENTIRE cake. I think S finally threw the rest of it out this weekend. There weren’t but 2 maybe 3 slices left of the 8” cake. I honestly thought they’d make a 6 but I guess we said 8 at some point. S says, “But there’s no top to freeze and eat for our anny!” Um…so we’ll just have to order another 6” red velvet for our anny? Sound good? YUP!

We lounged and watched TV, played on our phones, just relaxed. I know we both needed that!

Saturday we hit the spa! Actually, we went to breakfast, showered, then hit the spa. It was our pamper day.  We got massages and then pedicures.  Yes.  S got a pedi.  It was nice and relaxing.  There’s a theme for this trip; relaxing.

Then we hit the market again for some Cliffhangers without the apple.  I really didn’t want the apple on the sammy.  More chips, some cake, some packing, and back home to pick up the Missy girl!

So, that’s our story and I’m sticking to it.  If you head to Wintergreen Resort, have the calamari at the Edge.  The food for dinner was excellent at the two restaurants we went to, and the sammies are good from The Market.  Now, things may be different when their in full winter season.