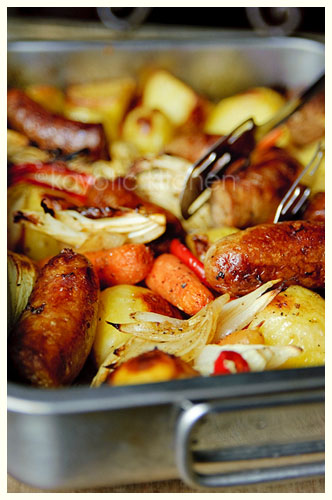 Yet another Pinterest creation.  As I was perusing Pinterst I saw this and thought it looked really easy and really tasty.  It was.  I saw this and when I did my usual Sunday grocery shopping, sure enough, Walmart had turkey brats on sale!  YIPEE!

This became the Lazy Wednesday Casserole as I played hookie the week I made this (two weeks ago I think).  I grabbed the LARGE roasting pan because I didn’t want the veggies just to steam from being too crowded.  If I do this again, when I add the sausages I will add more broth.  It dried out.  And, yes, I was being uber lazy.  Maybe instead of more broth some beer?  That might be good.

SUPAH easy, SUPAH tasty.  ABSO-FRICKING-LUTELY gonna make this again!  Ironically, WalMart had brats on sale again this weekend…so planning it for next weekend.  I skipped the balsamic vinegar as S isn’t a fan of it, but I could see how it would really enhance the dish is it was Italian sausage instead of brats.