I think my frittata seduced the left over pasta in the pan and created this deliciously different Spaghetti Pie. 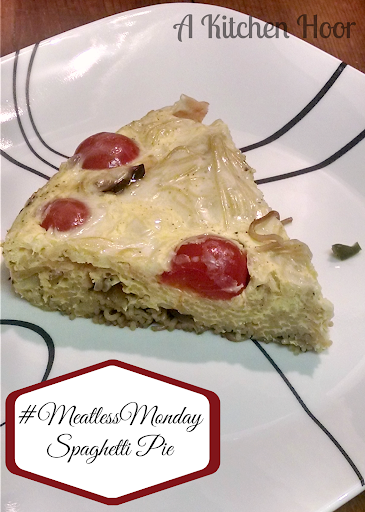 I really meant to do more prep work for this dish.  The pasta was supposed to be cooked the pasta the night before so I could easily toss it with the eggs, veggies and cheese.  It doesn’t help that I totally forgot the cottage cheese and almost forgot the mozzarella.  I did such a pretty job with the tomatoes on top that I didn’t have the heart to undo it all to add the cottage cheese.  *sigh*

So, I just topped it with the mozzarella cheese and called it a night.

This was different.  It was good, but it was…different.  I don’t know what I expected from all the photos I had seen of this little gem.  I don’t think it was this.  But I also think I failed in that I didn’t let the egg substitute settle into the pasta enough.  Make sure you don’t make the same mistake.  Either cook your pasta before hand or make sure you stir it all in the pan really well.

This will be a make again, I think.  There are too many combinations to not try and make another version of this.  And, I don’t know about you, but we usually do make extra pasta.  What do you do with that extra pasta?  If you’re like me, you don’t like to throw food out and put it in a plastic container.  It goes in the back of the fridge and then you eventually toss it because it sits in there too long.  I’m human.  Cut me some slack.

At least with this recipe, you can make another meal out of it.  You see?  Didn’t my tomatoes look so purdy on top?  It had nice plate value.  Too bad I was tired and didn’t have the energy to fight the dog for kitchen space on the floor to photograph it better.  Hopefully, in our house, when we get one, I will have a nice spot for some ambient light and a light box.  I timed it today.  The light shone through the windows from 11 to 2.  That’s it.  11 to 2.  Then it was dark again.  I do not like this apartment.

The kitchen is pretty, though.  I like the faux granite look.  The dark colors are pretty and it doesn’t show dirt as well.  Thankfully.  I can make a mean mess in there, too.  It’s sick.

I’ll have to plan a spaghetti and meatballs dinner one Sunday so I can make this again for #MeatlessMonday.  Speaking of which, I should do some research on what I’m going to make this Monday.