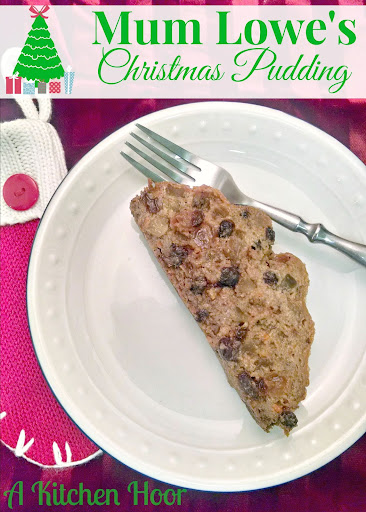 The holidays are about traditions; old or new.  They are also about family; old or new.  This is an old recipe for my new family.  Well, not REALLY new, but new that we’re married this year.  This will be our FIRST Christmas as a married couple.  That just sounds… wow.

I know I’ve made this at least once before, maybe twice.  It *IS* a holiday tradition in my old family.  And this recipe is old.  Not ancient, but old.  This recipe is from my mother’s best friend’s mother; Mum Lowe. 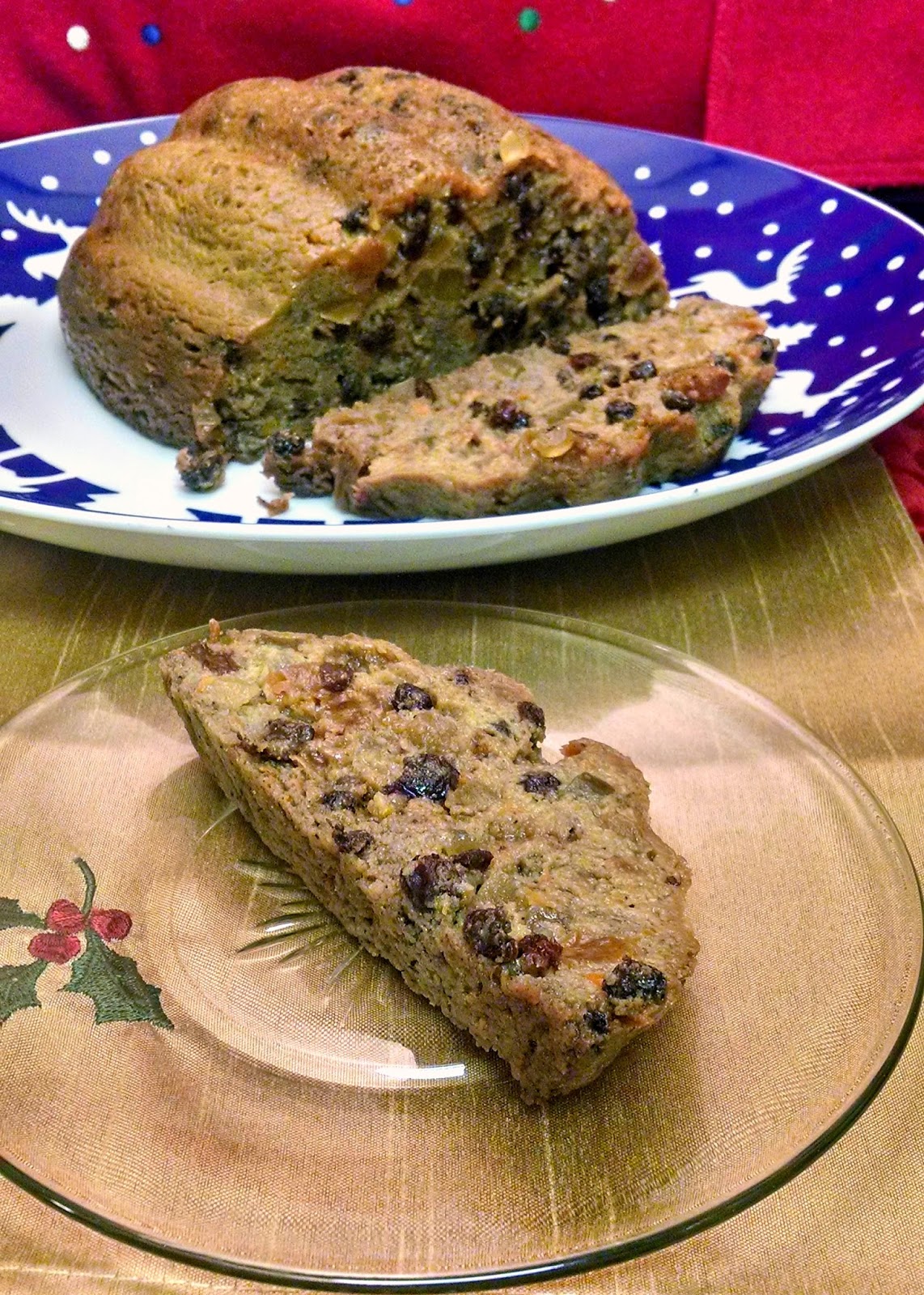 Mum Lowe was an amazing woman.  She was always there for our special events like graduations and weddings.  Well, not mine.  She had passed many years before I got married.  But she was at my sisters.  She was like a grandmother to us both.

And chutzpah!  Man did she have chutzpah!  Even in her late 80s she was always going and doing.  I have such fond memories of Mum Lowe.  And because of this recipe, every time I see, hear or even think about pudding during the Holidays, I think of this recipe and Mum Lowe.

As family, we did a lot of singing.  Even at a young age we were singing in rounds in the car.  One of our favorite songs to sing in the car on road trips was Over the River and Through the Woods, on the way to, ironically, our grandmother’s house.  We would sing We Wish You a Merry Christmas, Jingle Bells, all the traditional songs kids would know.  Oh, now, we didn’t just sing for the Holidays.  We seriously would sing all the time on road trips.  So, to say my appreciation for music started at a young age would be an understatement. 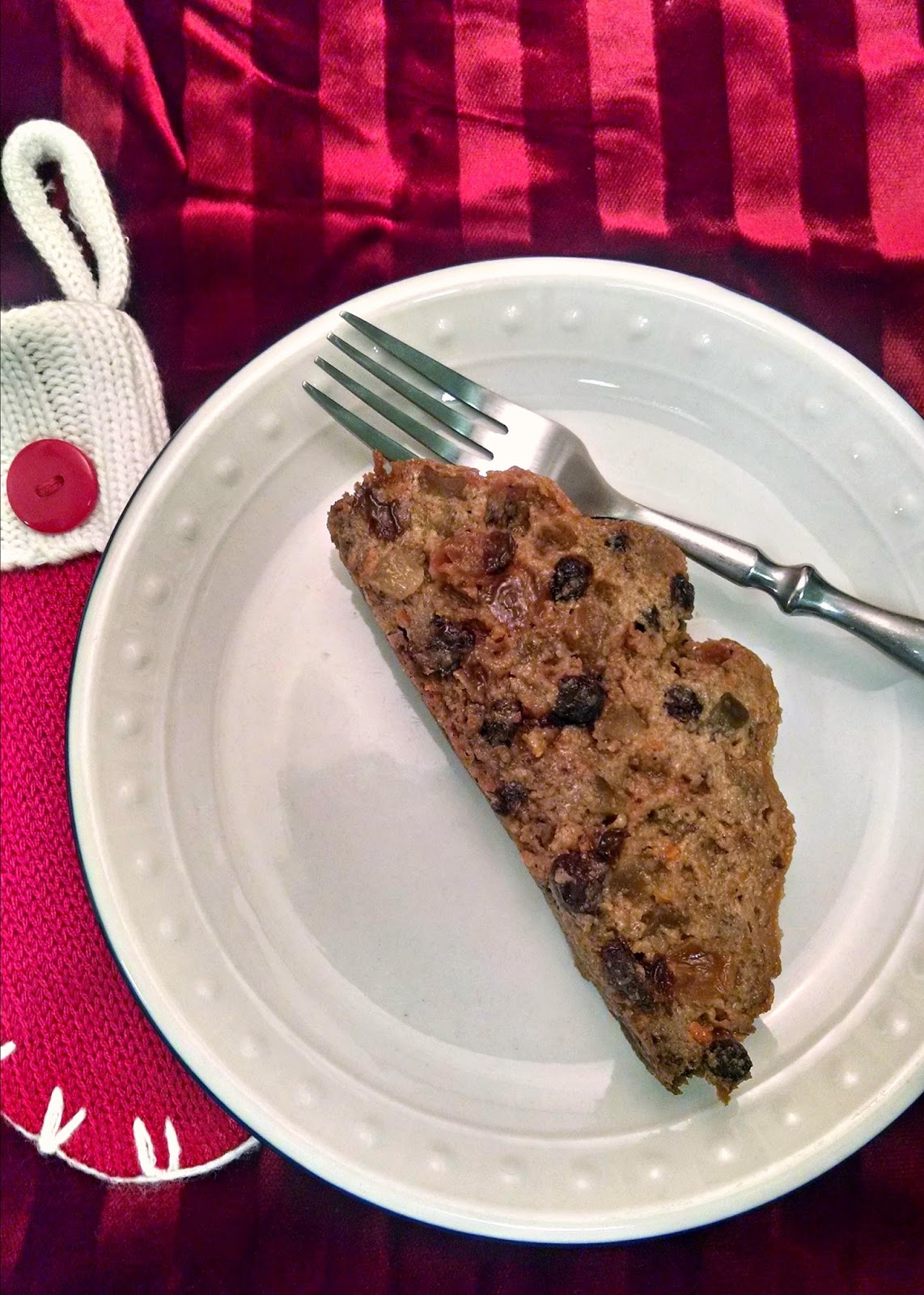 Here’s the connection between the two; the last stanza of Over the River and Through the Woods goes:

Over the river and through the woods,
Now Grandma’s cap I spy.
Hurrah for fun; the pudding’s done;
Hurrah for the pumpkin pie.

Pudding.  You see it there?  Pudding?  I hear pudding in this sing and immediately I am flooded with memories of Mum Lowe and making her pudding for Christmas.  It was always on the dessert table at our house for Christmas.  The pies and cookies may change, but the Christmas pudding was always there, drizzled with hard sauce.  I don’t usually make the hard sauce.  It’s usually too sweet for me.  I’ve included the recipe for the hard sauce, in case you wanted to make it for your family, new or old, this Holiday season. 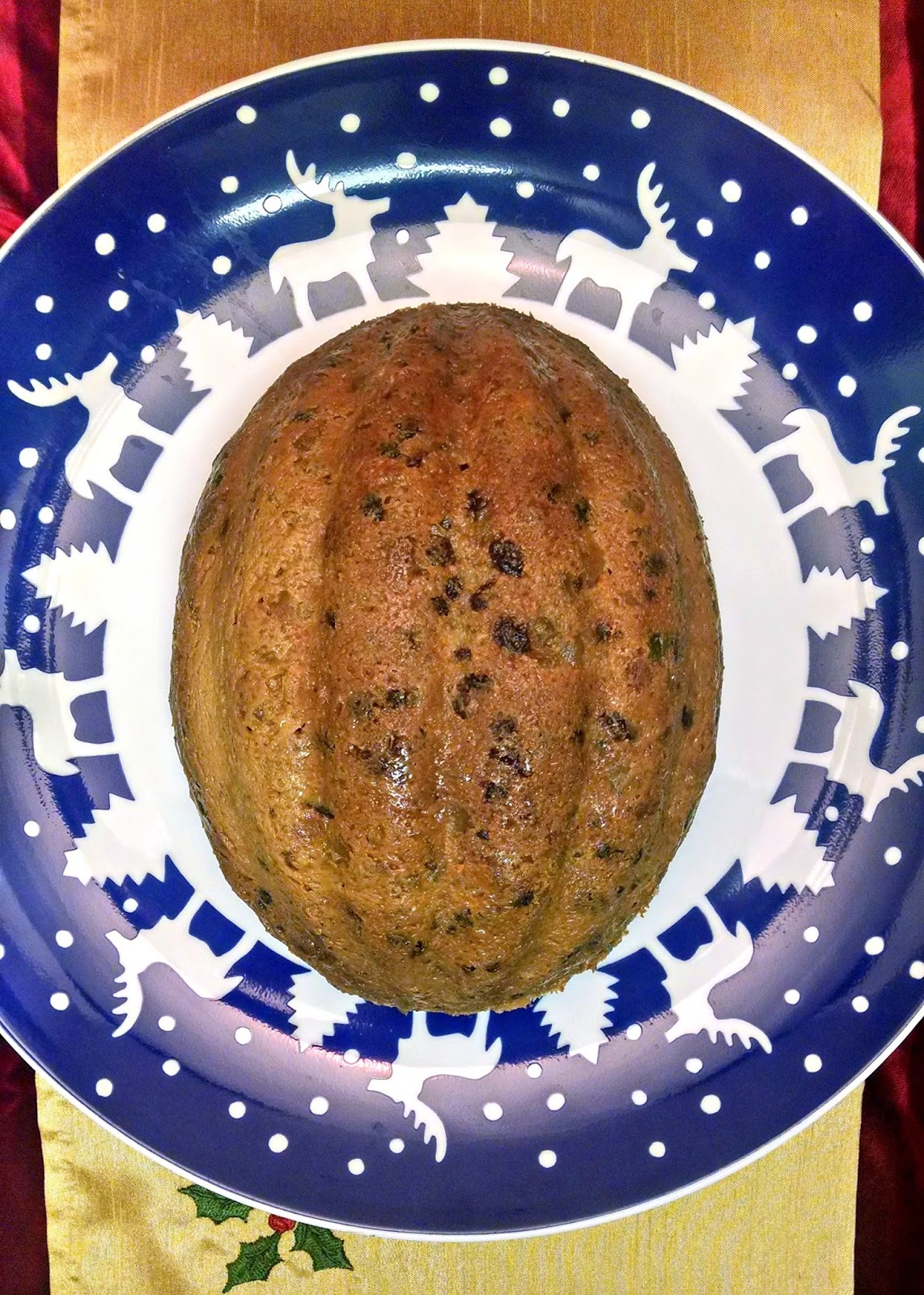 Even as a kid, I remember thinking to myself, “This is the WEIRDEST ingredient list.  I mean, WEIRD!”  Granted, I haven’t had much experience with other steamed pudding recipes.

It’s even more weird than I’ve written here.  The ORIGINAL recipe calls for suet.  I don’t know about you, but it’s not the easiest thing in the world to get; suet.  You have grab your butcher on a day they’re cutting meat.  But, TECHNICALLY, it’s food grade suet that’s, hard fat taken from around the cow kidney’s.  Mincemeat is another traditional recipe that calls for it.  No, not the stuff you get in the jar.  As long as I’ve been making this, we’ve NEVER asked for food grade suet.  Yup, we’ve always made it from whatever the butcher at our local grocery has available.  *shrugs* 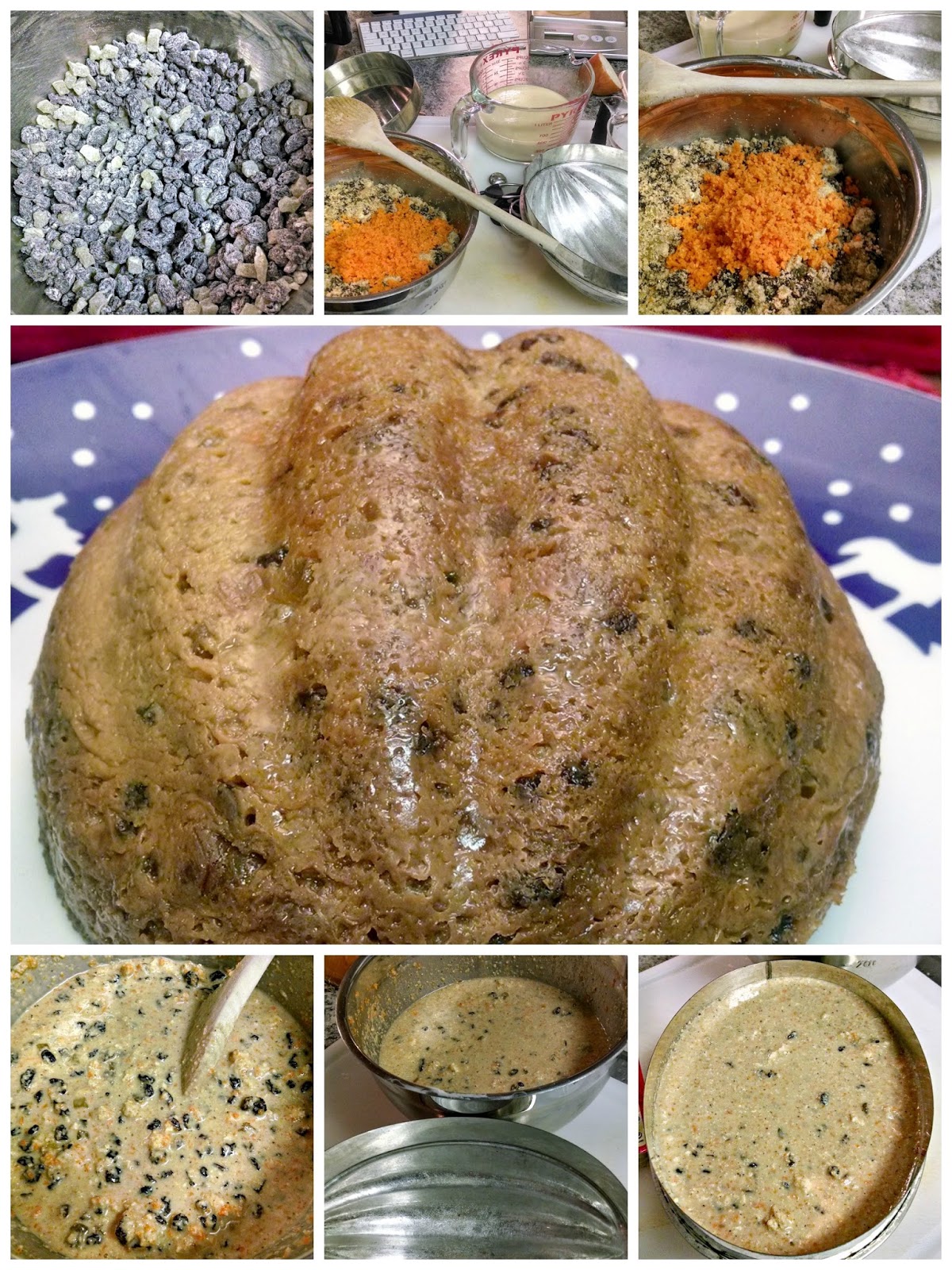 As you can see from the last row at the bottom, it looks weird.  To me at least.  It smells like coffee and cinnamon.  Not the most appealing.  But, have faith that it will be an amazingly delicious treat you’ll want to make again and again.  You may even ditch your fruitcake for this recipe.  I imagine this to be the ancient predecessor to fruitcake.  Maybe not.

There’s a varied assortment of “fruit” in this cake.  My curse every year, is shopping too late for this dish and never being able to find the requisite citron.  So, when I was in Bosnia in November, I saw packages of citron that looks OH so much more tasty than what I know I would have found at my grocery store.  So, yup!  I smuggled citron in from Bosnia.

It really was much better and more tasty than my typical package of citron.

And finally, a funny.  This recipe calls for currants (dried Black Corinth grapes) and golden raisins.  I opened my package of “golden” raisins and had laugh.  It seems these raisins were a bit confused. 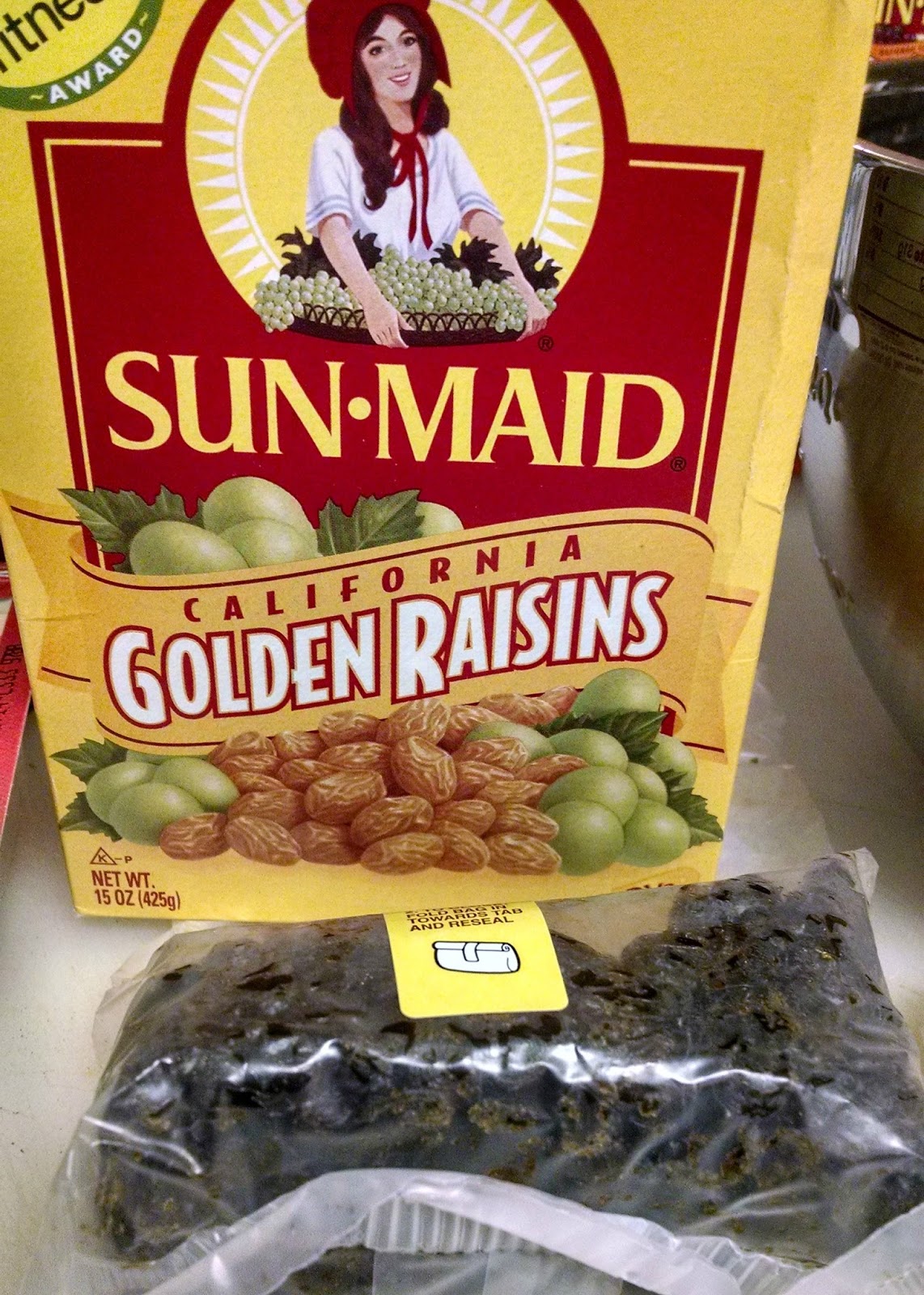 Yes, those are the raisins I pulled out of that package.  They appear to be having an identity crisis.  *snort*

Anyway, I hope you have a very happy Holiday season and make some new traditions in your family.