Delicious pumpkin is sauteed with onions, garlic, carrot, and chickpeas and baked in phyllo dough triangles to make these Pan Roasted Pumpkin Samosas. 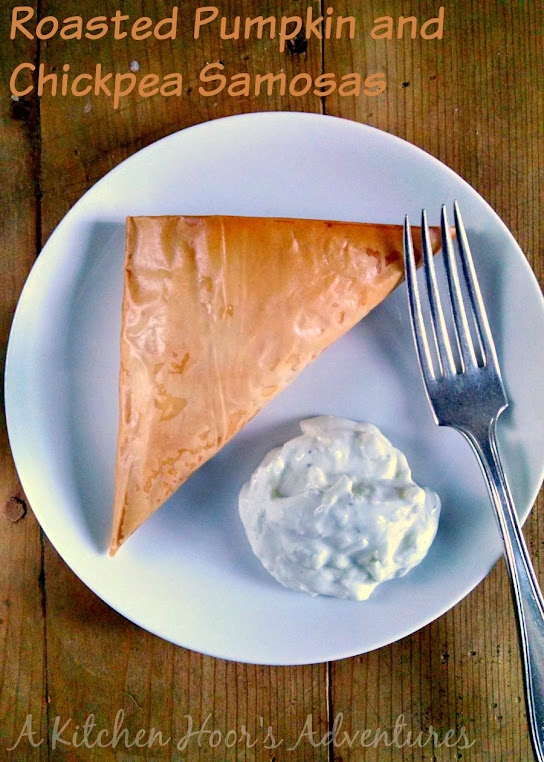 Hi and welcome to #PumpkinWeek hosted by Terri from Love and Confections. We are celebrating our love of the season with a whole week of pumpkin goodies, leading up to National Pumpkin Day.

17 Food Bloggers have come together to share over 65 recipes with you. In addition to homemade pumpkin puree, pie, and cookies, we are also sharing savory pumpkin dishes like hummus, chili and pumpkin corn chowder. Come back every day for #PumpkinWeek recipes. You can also find these great recipes and more on Love and Confections’ #PumpkinWeek Pinterest Board!

Yes!  It’s #PumpkinWeek!!  I am so happy it’s finally here!!  I have been cooking with pumpkin so much these past two weeks S thinks he’s in a Charlie Brown episode.  There’s been some canned pumpkin (as emergency reserve), whole pumpkins, diced pumpkin, roasted pumpkin.  You name it!  There’s pumpkin.  Everywhere.

Or this one, but trust me when I say there’s pumpkin in there.  Delicious pumpkin, actually.

S and I have been together many years.  Seven, I think?  And this week, we’re celebrating our one year anniversary on the 24th.  It’s SO EXCITING! *said ala Stanley Tucci in Hunger Games*

In all the time we’ve been together, I never in my WILDEST dream would have thought he’d like these.  Here’s the tracker record:

So, when I said I didn’t think he’d like these, I have supporting evidence for my hypothesis.

I would love for him to try everything I make at least once.  I don’t think he’ll try the brownies, but you never know!  He may surprise me with those, too.  I do know he’s not fond of pumpkin pie so…  *shrugs*

After my photo shoot, he was excited to get to sample the props.  I was, too.  “Those are good!”  As if he’s surprise.  I was the one with the surprise that he actually liked them!  So, I said, “Well, since you like them that much, we’ll have these with dinner tomorrow night!”  I initially had planned on taking them to work, but hubs trumps hungry co-workers ANY day of the week!

I initially was going to make these with roasted pumpkin, but it didn’t have much texture and I didn’t want the chickpeas to be the only texture in these samosas.  So, I pan roasted the pumpkin.  It’s still roasted.  Isn’t it?  No?  I tried.

A word on the phyllo.  Use two sheets.  Trust me when I say this.  I know it doesn’t look like much, but the one that had three sheets?  Well, let’s just say it’s the reject of the bunch.  Use two.  And if you’d prefer, you can brush butter on the sheets.  We are limiting our fat intake, so I used cooking spray.  To me, it does the same.

And now…THERE’S your pumpkin!  With a chickpea.  These are crispy, tasty,  curry flavored packets of deliciousness!  Serve with the cool, cucumber and garlic flavored raita made with greek yogurt and you’re all set!  Serve them as a nifty nibble, a different appetizer, or just because you want them!

Make sure to visit the rest of the bloggers to see what they’ve cooked up for this first day of #PumpkinWeek!

Check out all the #PumpkinWeek Bloggers and their recipes: