These Peanut Butter Banana Brownies are light, moist, delicious, and full of that my favorite flavor combination. 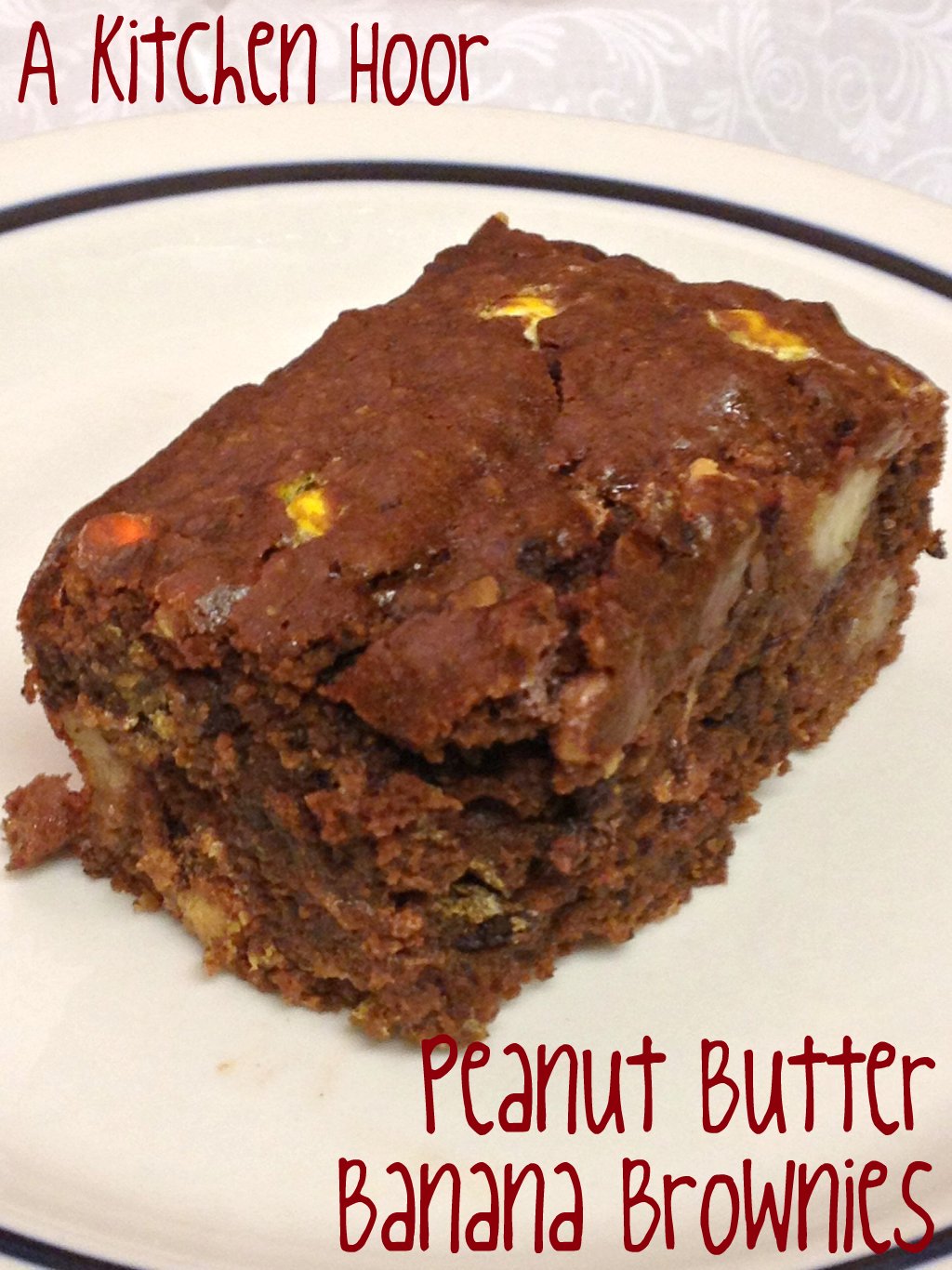 The alarm went off at 3:30.  In the morning.  On a Sunday.  *yawn*I planned on making something else with these bananas.  BUT I’m going to be gone next week and S isn’t a huge fan of cupcakes.  I’m still going to make them.  It’ll just have to wait until I get back.  If I had more time, I might have still made them.  But I felt like a chicken with it’s head cut off yesterday.

We started with breakfast at Silver Diner.  Then, we went to DSW for some flats for my trip.  Next, we went to Costco for some groceries.  And finally finished up at WalMart for the rest of our his groceries.  We packed up about 5 or 6 boxes for the eventual move.  Threw out a bunch of stuff.  Decided to sit and watch a movie.  MAN was it weird.  The Woman in the Fifth or something like that?  I didn’t think it would be weird.  It had Ethan Hawke so…  *shrugs*  It was.  Not sure I’d recommend it.

We skipped lunch and opted for an early dinner.  Since we were hitting the sack early…cause the alarm was set for 3:30…we started dinner early.  I made the Sun-Drimed Tomato Turkey Meatballs.  Ironically, WalMart had some ground turkey on sale.  It was white meat ground turkey.  They came out a little drier than usual.  If you use the white meat ground turkey, you might want to add some onion or something to keep them from drying out.  Just saying.

I started packing.  It was crunch time.  I wanted to be packed, eaten, dessert had and in bed by about 8.  However, that didn’t happen.  It was more like 9:20.  I think I was trying to exhaust myself so I COULD sleep.  Didn’t happen.  I had issues turning my brain off.  Needless to say, I’m REALLY nervous being the lead on this trip and I’m worried it will be fruitless or will meet resistance from the team there or the other person traveling with me.  It seems she might have her own ideas?  I just want it to go well.  Please?  Make it go well?

I spent a lot of Friday staring at this:

It seemed to take forever to complete the few things I needed to get done Friday before I left.  And of course, it was “oh crap she’s leaving I need to ask her this question before she goes” Friday.  LOL  It’s not like I’m going to be gone long.  It’s just a week.  Can’t it wait?So, Friday someone from #hikerchat sent me this:

Made me LOL.  We’re planning a camping trip the weekend we move.  The 30th we’re moving some stuff into the new apartment, the movers come the 1st to move the rest of the stuff.  We head out the 3rd for a camping trip.  LOL  We’ll have to unpack when we get back.  Our backpacks are packed for camping.  Just need clothes to wear on the trip in them.  It should be fun!And here it is 9:30 Bogota time and I had such good intentions of posting this BEFORE I started my travels.  What is it about the best laid plans?  *snort*  Oh well…

All I had to do was brush my teeth, my hair, and get dressed and we were on the road.  Since it’s technically a domestic flight, I wanted to be there at 5.  Well, I arrived at the airport and there’s an awful lot of people here already for a Sunday.  Some, what looks like school kids, were going to the Dominican Republic.  I think one of them was carrying an instrument of some sort?  Lord knows.  Thankfully, they were not rambunctious on the plane, which was boarding shortly after I arrived.  After successfully mashing the crap out of my finger, I made it through security and boarded.

I bought a yogurt and a water before boarding.  That was technically breakfast.

Thank I reached into my stash from my foodie penpal goodies and ate this, too.

I rarely if ever sleep on planes.  For some reason, I just can’t seem to get comfy enough to sleep on plains, trains or automobiles.  *snort*  So, I started a small knitting project, that I wound up frogging and starting over.  OMG was that second skein TANGLED!  Holy!  The guy sitting next to me probably thought I’d lost my mind.  OH and as the rest of the plane was boarding, the elderly woman behind me said, “I should have brought my knitting.”  this just feeds into the stereotype that only grannies knit.

*I* am not a granny.  *I* knit….so I don’t kill people.  LOL  We were late taking off, which means we were late to land.  Thankfully, the next gate wasn’t very far.  We landed at 9 and took off from 3.  I had enough time to pee and we were boarding.  This was the longest stretch of my travels.  My stomach was rumbling by the time we got on this plane and I was trying NOT to eat the rest of my stash knowing we would get some food on this flight.

I got the sandwich…

A grilled cheese and salami sandwich.  Yeah, not what I was thinking.  I ate the bottom half with the cheese and the salami.  The top was a bit crusty and dried.  I ate the croissant and saved the pineapple and yogurt for later.  My knitting was in my bag, but I also dozed off a minute or two I think.  I was smart this time and used the restroom before getting off the plane.  My counterpart, not so much.  I made it through immigration, got my luggage, spotted the driver and waited…and waited…and waited…and texted…and called…and waited.  I finally started to head back toward immigration when she appeared.  LOL

We checked in and walked to get pesos and food.  I was so hungry, I forgot to photograph my crab ravioli with yellow pepper sauce.  It was fabulous!  After lunch, we walked to the grocery store so I could get some band aids for my heels.  My flats have rubbed.  And got some ibuprofen as I THOUGHT I had forgotten mine.  However, I wound up finding it later.  LOL  Now I have plenty.  Because…the headache has already started and I laid down in pain for about 5 hours.  It has subsided for now.  I’m drinking as much water as I can to help.  Hopefully I won’t get a repeat of last trip.