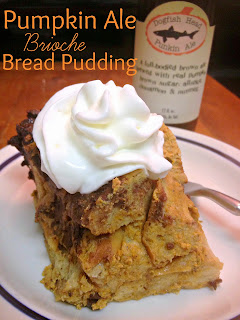 Man, do I really love fall!! I love the cool air, the flavors, the aromas, the fact that I can have the oven on and not worry about it being too hot in the apartment. I REALLY love baking fall produce like apples and… PUMPKIN!!

Actually this is pumpkin and pumpkin ale. This was a recipe I made for the Spiked! Recipe Challenge. It’s a bi-monthly challenge for recipes made with alcohol. I stumbled on it at one point and thoroughly enjoy participating every other month. In September it was fall craft beers. I chose Dogfish Head Pumpkin Ale. I made Pumpkin Ale Brioche Cinnamon Rolls. WOW were they good!!

But, in every challenge, I make at least two recipes to see which is the best. This was such a toss up! They were both fabulous, and I’m not just saying that. S even liked both of them, which is rare. He usually doesn’t like the sweets I make unless it’s pie.

My brain storming included a beer strata of some description. But then it morphed into a sweet strata which is a bread pudding to me. Since I’ve never made a bread pudding – no…never – I thought I should do some research to get the liquids down. I didn’t want it to be too watery or too dry. I wanted it to have the perfect pumpkin flavor with just enough spices to have that fall flavor.

And oh my was the aroma amazing! I wish pumpkin pie spice could be used year around. I guess I could, but nah. LOL Spring always smells so fresh and new. I don’t think I could have fall year round. BUT pumpkin pie spice does small amazing when it’s baking. Oops. Got distracted again. I do that often. Go off on tangents. *follows shinies*

For those that are wondering, no it doesn’t have a beer taste or even a beer aftertaste. This has a level of flavor that if you don’t know you wouldn’t be able to put your finger on. If you smell it right out of the oven, you can smell the aroma of the hops, but once it cools, not so much. It’s creamy, rich, and fabulous! And I’m not just saying that…it’s what I’ve heard.

Well, I hope you enjoyed my guest post and hope you try out my pumpkin ale bread pudding. It’s an interesting take on a classic dessert.

This is also a guest post at Ducks ‘n a Row today.