Sesame Shrimp Salad is not a chore! Cook the shrimp (or buy the pre-cooked frozen), grab some pre-shredded cabbage and carrots, and you can have dinner on the table on the quick! 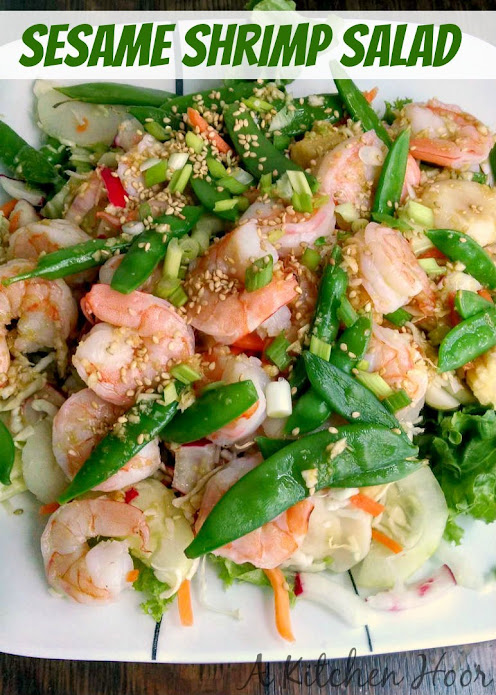 I think I’m going to change up the menu plan. Oh wait. You can’t hear the conversation in head. Let me back up a bit…

See? This was for salad Tuesday. But I think I’m going to flip Tuesday for Thursday. The way I have it, there’s three weeknights in a row where I’m cooking and two where I’m not. If I flip Tuesday for Thursday, I cook a meal, rest a meal, cook 2 meals and rest one possibly 2 meals (yup! We get lazy on Saturdays sometimes). I think that makes more sense and I won’t feel burned out early in the week.

This will be especially helpful during key work related reporting times, like now. It’s quarter close. I’m usually pretty stressed and that makes me more tired than usual. Like, falling asleep shortly after 8, tired. Granted, we do go to bed at 9 because we get up before the crack of dawn even rolls over, but still… It makes me feel UBER old.

Dad and I had a conversation about that this weekend. We used to give him such shit about falling asleep so early in the night, but now I can understand why. I am just like that some nights. Most people don’t understand the mental tiredness.

S? I don’t think he gets it. His job is physically tiring. He’s on the go non-stop; has to be “on” all time. What I mean by that is as soon as he walks through the door, he turns his customer service switch on and he doesn’t get to turn it off until he’s in the car on the way to pick me up. I know what that’s like. I have to be like that on work travel except, even in the car on the way back to the hotel I have to be. Sometimes at dinner, I have to be on. Sometimes IN the hotel I have to be on. There’s no down time. It’s exhausting to be “on” all the time.

This salad? SO not a chore! I cooked the shrimp before hand, the carrots and cabbage were pre-shredded, and the peas were lightly steamed in the microwave. Water chestnuts and baby corn were canned.

All I had to do was slice the cucumber, radish, and green onions, mince the garlic and then mix the dressing. It didn’t take hardly any time at all to whip this up. Other salads, not so much. If I can prep for it, it doesn’t take long, but honestly, sometimes I’m just lazy. There. It’s out! I’ve said. I’m LAZY! LOL

Whether you prep for this or not, it’s a tasty salad. I love the sesame flavor with the shrimp and veggies. It is a delicious weeknight dinner salad.