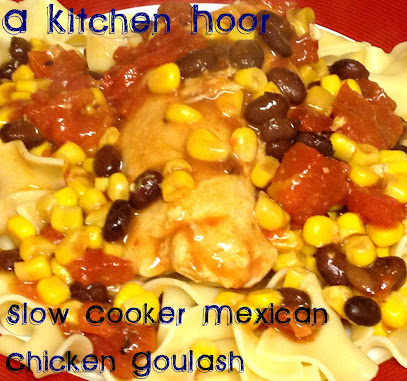 S is not big on soup for dinner.  I don’t know why.  He always says, “Is that all we’re having?”  Maybe it’s not filling enough for him?  But it IS dinner…and it’s the last meal before you sleep.  So, I’m thinking it shouldn’t be a HUGE meal anyway, right?  Right?  *shrugs*

I told him that morning that I was going to the fitness center.  I’m T.I.R.E.D of the weight I’ve gained since *steps out of closet* stopped smoking.  THERE!  I said it!!  I wasn’t thinking,  didn’t change my eating habits, and didn’t think I’d balloon up.  And…well…me and food have a history.  It’s the present and future that I need to change.  Sometimes old habits just.  Don’t die.

So, I set the vacay timer on this one to finish AFTER I was home from the fitness center.  I anticipated both of us going.  Didn’t happen.

I was going for Cheddar Chicken Corn Chowder.  Yeah.  Not so much.  I blame the tomatoes.

Here’s the low down:

This is a pantry cooking meal that’s super easy!  I mean like, threw it in the slow cooker in about 4 minutes easy.  I put the chicken in the bottom then topped with half an onion that was thinly sliced, one can of black beans that were rinsed and drain, one can of cheddar cheese soup, two cans of corn that were drained, and two cans of tomatoes that were not drain.  Then I sprinkled one packet (not shown) of Ortega, low sodium taco seasoning.  I set it to low, set the vacay timer, and went to work.

We get home and it smells good.

S: What is it?
Me: Dunno yet
S:  It needs something…rice noodles.  Something.
Me:  Yup.  There’s Spanish Rice in the pantry.
S:  Okay.

That’s when I went to change and hit the fitness center for a hike training walk on the treadmill.  I was at 6 incline at a moderate 3 mph.  My intent is to build leg strength for our hikes.  There’s no way I can run on the thing. There’s no way I can run anyway unless chased by someone who’s going to harm me.  My knees just don’t work that way any more.

Dinner was the last thing on my mind as I was jamming to the “Dance” station on iheartradio ap on my phone.  Can I just say, I’m tired of downloading my stupid music time and time again since it won’t CONNECT TO FRIGGIN WIFI!!  Thank you Apple for BREAKING MY PHONE WITH YOUR SOFTWARE UPDATE!!  *ahem*  Pardon my rant.  When Greyhound by Swedish Mafia hit, I HAD to just crank that treadmill back up and hit a nice, sweat breaking perspiring, stride.  I was spent after that song was over.  It felt goooood.

When I returned home, I could smell noodles cooking.  I could have sworn rice, but noodles are good, too.  That helped me name this pantry cooking dish.  It literally was stuff I threw in the slow cooker.  I have no idea what I would do without one.  They are perfect for pantry cooking and easy meals like this one.