Posole is a hearty and delicious soup. Made with simple ingredients, throw Slow Cooker Chicken Posole together for a delicious and warm soup when you get home from a cold day at work. 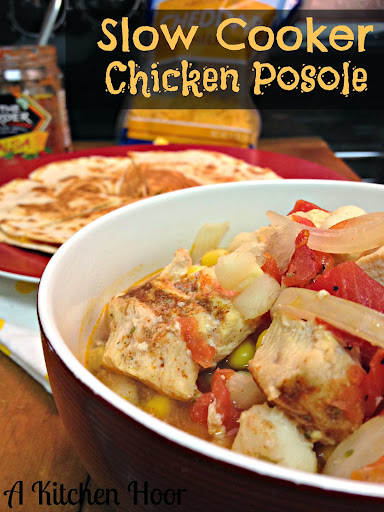 Hominy.  How awesome is this?  I mean, it’s the stuff that makes grits.  How can you NOT like that?  I love grits ergo I love hominy.

Posole.  This is the term many cultures have used to name hominy.  It is also the name of this dish, as best as I can find out.  It is normally a pork dish, but I wanted to make it chicken.  Because that’s what I had…chicken.

Hominy is perfect straight out of the can with a little butter, salt and pepper.  There’s a recipe out there that you can make arepas with it.  I haven’t really tried that yet, but it’s on my list.  You can mash them like potatoes.  They can go into corn bread or corn pudding, just like corn.  Go figure!

There’s quite a few things you can do with hominy.  Most that I’ve stumbled on are more South American in nature.  It’s history dates back to the Lewis and Clark days.  They gifted the native Indians the lye soaked hominy and it has been immersed in many of their cultures every since.

Yes it does seem redundant to add corn and hominy in the same dish.  That’s why I skipped the black beans and just included tomatoes.  Otherwise it would lead to a carb coma.  If I was preparing a pork posole then I would have included a couple of cans of green chiles.  Not that green chiles don’t go with chicken, but I like green chile pork stew the best.

This has always been on my “bucket” list to make, but just never did…until now.  Something just made me want to throw this in the crockpot for dinner this week.  Since S isn’t a huge fan of just soup, I threw in some quesadillas to round out the meal.