Got left over pizza dough? Make some Spinach, Mushroom and Ricotta Calzones for #MeatlessMonday 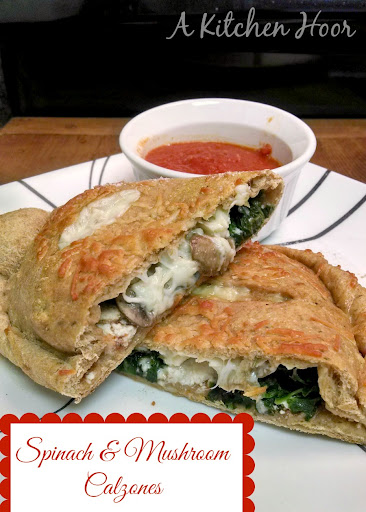 So, if you made my pizza dough last week, you will have extras.  I love extras.  Especially when they’re tasty extra that makes a whole second meal!  It’s a two-fer!  LOVE THOSE!

I’m not sure when I made this dough that I had calzones on the brain.  But, since I had quite a bit of dough left over, and we’d already made two pizzas, it was either this or a stromboli.  I might have tried my hand at a dessert pizza if I hadn’t put so much savory flavor in the dough while I was making it.

No, I do not shy away from carbs.  S’s step-mom is a dietitian.  Her plan does not shy away from carbs.  It’s fat.  When we were on her program, the weight melted off.  AND we could totally eat this calzone, no probs!  Fat free mozzarella and ricotta and voila!  Yummy dinner that’s perfect for her plan!  No.  I don’t make recipes for PEP.  I’ve often thought about it, but just haven’t reached out to her to do so.

Since I divided my dough out into smaller 12 inch portions, I used the 2 left over dough I had.  Since these were for dinner, I wanted them to be hearty and filling.  If you’re making this for a lunch, you could probably use one and roll them out smaller.  I took one for lunch the next day and only ate about 2/3 of it.  It was a bit too much for me that day.

I normally would have roasted the tomatoes in the oven, but had a total brain fart that weekend and forgot I even BOUGHT whole tomatoes.  Much less two cans.  *snort*  So, I thought I’d try this instead.  Let me tell you, it was delicious!!  It had enough tang and sweet, garlic flavor, spices, and consistency to make the perfect marinara sauce for these calzones.

I should have used this as the base for the toppings, but didn’t.  They were still simmering in the pan while I was making the calzones.  I didn’t add any extra juice from the can.  this is the juice that the tomatoes made while simmering.  It’s the perfect amount.  It at least was for me.  I like my marinara a little on the thick side.

Now, I’ve made calzones before.  They’ve never stayed closed.  Stuff seeped.  And not really in a good way.  When I was researching calzones to make my own, I saw some that were slashed and some that weren’t.  I thought I would try slashing so they wouldn’t pop in the oven and all the cheese goodness oozed out.  When I’ve made these before, they didn’t say closed.  That’s why I opted for an egg wash for the seem, and then on top to give them good color.  Plus, it was glue that would hold the Parmesan cheese on top.

I’ve been playing around with planning.  This is a good meal to plan.  The cheese I grated for pizzas the previous week was for those pizzas and this meal.  Part of the Romano I grated last weekend, when into the bag with the mozzarella cheese for this weekend.  The dough I made last weekend went into this meal this week.  You can easily freeze pizza dough.  Just let it thaw in the fridge for at least 24 hours, then allow it to come to room temperature at least 15 to 20 minutes before using.

I actually rolled all my dough out, lightly sprinkled them with flour, then folded them up so they could rest while I prepped the tomatoes and the toppings.  This gave them extra time to rest before filling and baking.  This kept the crust from being too stressed which can make it though.  If you haven’t baked your own bread, then you have no idea what I mean.  You have to have over kneaded or over worked your dough to understand.  It’s just no purdy.

But, these calzones are!  I hope you try your hand at making home made pizza dough.  It’s so economic and so easy!  Especially if you have a stand mixer, but even if you don’t, you can easily whip up a batch that can make 4 to 5 pizzas…for cheap.  Cheaper, healthier, and better tasting than the delivery stuff.