This hearty breakfast is perfect for lazy weekends, guests, or even brunch! S’s Breakfast Scramble is packed with sausage, hearty vegetables, and eggs (or egg substitute). It’s easy to double or triple for a large hungry crowd. 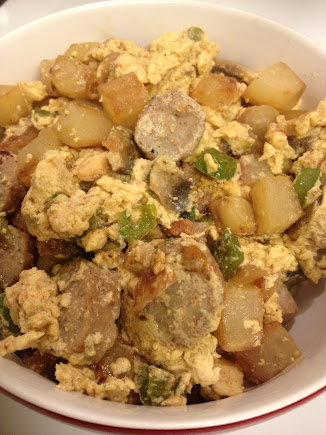 I can’t remember how this came to be or the first time he made this for me.  Since the first time he made it, it has evolved into something little more waist and heart friendly.  Initially it was MANY whole eggs, bacon, and I think cheese was involved a few times.  But none of those items are in there any more.

I think the first time he made this he was still living in Cleveland at the time.  It was a nice, large kitchen in that apartment, but the building was rather old and the windows were SUPAH drafty.  Sometimes I kind of miss that apartment.  The memories of our first meeting, our first meals, getting snowed in Easter weekend.  LOL I have fond memories of that place.  Having to turn the gas off after cooking because the stove leaked.  THAT I don’t miss.  Having to ask him to turn the pilot light on the oven if I wanted to bake while he was at work.  Don’t miss that either.  The claw-foot tub I miss.  LOL

This picture was taken on the day he moved out of Cleveland and into my life permanently.  His kitchen truly was a bachelor’s kitchen, except he had Henckel knives.  I couldn’t understand that.  It just baffled me.  So, the next time I came to visit, I brought practically my whole kitchen with me.  Mixer, bowls, spatulas, etc.  I figured, if I was going to spend a lot of time there, and I knew I was, I needed to be properly hoored out.  LOL

We start with potatoes and some form of breakfast meat if it needs to be cooked.  Lately, I’ve been using the Jimmy Dean Turkey Sausage Links.

Then we chop various vegetables: celery, green onion, green pepper, mushrooms, jalapeno.  At this point, the dog is usually sitting not so patiently waiting for something to be dropped on the floor.  She’s like a Swiffer, but she doesn’t have anti-bacterial cleaning solution.  She just looks like this:

Are ya gonna drop something for the dog?

She’s such a mooch!  LOL

When the potatoes and starting to get tender, then we add all the vegetables except the mushrooms.

Those are sauteed until they are nice and tender, then we add the pre-cooked sausage and the mushrooms.

Continue cooking until the meat is heated and the mushrooms are cooked.  Turn the heat down to low and then add the eggs.

At this point, it’s clean up time.  I have started covering the pan to try more of a frittata type egg dish, but the egg substitute just doesn’t really lend itself to that easily.  So, I inevitably flip them so they don’t burn or stick on the bottom.  Hence the name Scramble.

Once it’s all said and done, we dish it up into two bowls and chow down!

To make it a relatively quick breakfast meal, we use the pre-cooked turkey sausage.  I like the links, but you could use patties if you want.  We’ve made it with turkey bacon…not so much.

We’ve made it with low fat bacon from Gwaltney, but not recently.  We’ve also made it with Shady Brook roll sausage.  I like the roll sausage to use in my cabbage rolls.  S doesn’t like them, so I don’t make them often.  I LOVE them and find them a comfort food.  *shrugs*  Maybe I’ll whip up a batch.  I think there’s some sausage in the freezer somewhere….  hm….