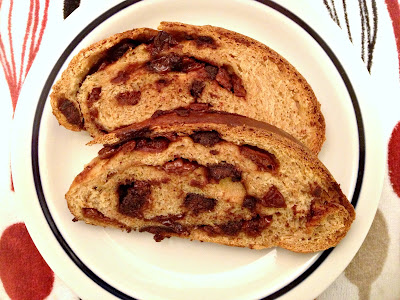 Yup!  It’s a mouthful!  And I’m saying it slightly inebriated as I’m sipping some scotch after a HELL-atious week.  I found out that I will be traveling to Bogota in April.  I’m excited and nervous at the same time.  I am the “team” lead this time.  If by team you mean of the both of us going, then yay me!  *snort*  I am a little nervous.  I haven’t been a lead on such as task as this.  I just hope that I can if not meet then exceed their expectations of my results.  *crosses fingers*

It’s crunch time!  And by that I mean quarter close.  We’re having to be more responsible for our books unlike in the past where our parent department has handled some items.  It’s a good thing but that also means added work for me.  There’s not many under me that can help or even know how to help.  I’m just trying to get them up to speed on where I was a about a year ago.  LOL  Yes it IS a slow process.

THIS is why I feel the desire to spend MORE time in the kitchen creating.  Not that work is THAT bad, and I do enjoy it even though it IS very stressful at times.  However, the kitchen is and has always been my TRUE passion.  I love to be in there just…well…creating!  It’s a way to relieve stress for me. 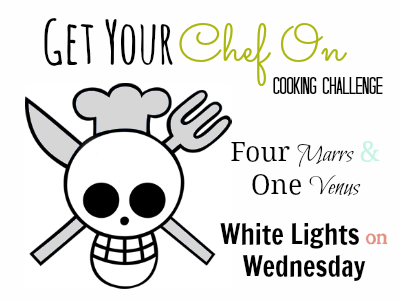 I signed up for the GYCO challenge at White Lights on Wednesday.  I’m not sure how I came to follow this blog.  I think it was a give away I stumbled upon when I decided to make this more than a passing fancy about trying recipes.  Speaking of which…no…nevermind.  I will try NOT to be distracted by shinies tonight no matter how hard they try to make me stray from this post!  Remind me later…  Okay?

I love the logo!  Cracks me up!  I saw that and knew I had to try it at least once.  My mother always said I should try everything at least once, right?

Since then I follow it.  It’s on my blog roll and read it almost every day.  The recipes are TOTALLY #droolworthy !!  The challenges look fun.  I just hope I can hold up to this one.  I have a few things up my sleeve.  We’ll see how the weekend goes.  *wink wink*  Since there’s no hike this weekend, it could be a very creative one!  And it could be in the favor of the fur-baby.  We’re hitting the Super Pet Expo this weekend.  I may be inspired to create something for the Missy girl.  But that’s later.

Now it the time for… Chocolate Cherry Swirl Stout Bread.  You see, there was this Cooking Light recipe…I think I made it once.  But the flavors are something that really struck me as interesting.  The stout, the chocolate, the cherry…  They all blended so well together.  SO when this challenge came up, that recipe is IMMEDIATELY what I thought of.  However, I couldn’t just make a recipe I already had.  I had to create something else.  But my dilema being the flavors.  They’re not original to me.  If not for that recipe, I’m not sure I woul dhave put them together at all.

Ah to hell with it!  Just make a recipe!  There are no true original flavor combinations in this world any more. Someone’s already thrown it together at least once.  *shrugs*  So that’s just what I did.

I soaked the cherries in 12 ounces of Guiness stout overnight.

Yes I took a picture of the cherries, but you can’t really see much…just a bunch of foam.  Once they soaked overnight, I coarsely chopped them with some chocolate and set them both aside in a small bowl.

Then I proofed one package of yeast in 1/2 cup of warm water.  Then I added stout, wheat flour, bread flour, and vital wheat gluten.  Then some sugar, egg, and margarine.  I LOVE my stand mixer.  It does so much of my kneading for me.  How did I EVAH make bread without it?

Then I turned it out onto a floured surface (aka my sliced and diced silicone bakers rolling mat) and kneaded it by hand a few more times until it was smooth and elastic.

I let it rise until it was doubled in size; about 2 hours.  Then I punched it down and let it rest 5 minutes.  Once rested, I grabbed my rolling pin and went at it!  I rolled it out to about a 10 x 13 rectangle.

Oh yeah!  Like my rolling sleeve?  Dad got me some a while ago.  They came in quite handy was I was trying to roll this dough out.  I put some flour on the sleeve and it worked like a charm!  It hardly stuck at all. I can’t wait to try the other one on cookie dough.  Shinies!

I sprinkled the chocolate and cherries on the dough making sure to leave about 1 inch at either end for sealing.

Once I spread the cherry mixture across the dough, I began rolling it up from the end opposite the 1 inch seam.  Make sure to roll as tightly as you can without ripping the dough.  This is always my problem.  I have tried swirl breads, but they just didn’t seem to swirl right or had a huge bag once it baked because I didn’t seal it right, roll it right, let it proof long enough.

This one APPEARED to have rolled perfectly.

I placed the dough on a silicone baking mat, sprayed with cooking spray, covered with a linen towel, and allowed it to proof for about 30 minutes or until doubled again.

I shallowly slashed the top of the bread to prevent it from becoming deformed in the oven.  That’s the other problem I’ve had with swirl bread.  They get deformed.

Once doubled, I gave it an egg white wash and then bake in a preheated oven to 350 for about 45 minutes to an hour.  I tested it with a meat thermometer to make sure it reached about 140 inside.  Previously, my swirl breads have SOUNDED hollow, but weren’t done in the middle.

Can I just say…it took ALL the restraint I had to NOT slice into this when it came out of the oven.  I mean, I’m like that with any bread I bake, but this in particular?  SMELLED A-MAZING!  Cherries…chocolate…bread…nomnomnom.  Even S said it tasted good!  That’s saying something because he usually don’t like the bread I bake.