Make this stove top version of the traditional tuna noodle casserole on days when you don’t really want to turn the oven on.  This Stove Top Tuna Casserole has all the flavor, but requires no oven! 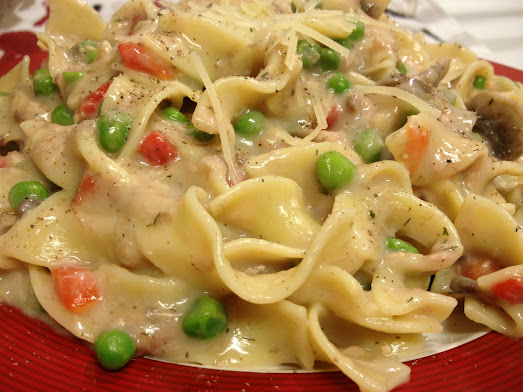 Sometimes…I just don’t feel like cooking. I KNOW RIGHT?  How can that be?  I’m a kitchen hoor!!  It’s not in my nature to not want to cook something!  But, when work kicks my you-know-what, sometimes I really would rather just eat PB&J sammies and Doritos than fire up the stove and create.  Or boil up some mac n cheese and hot dogs.  Or….make Stove Top Tuna Casserole.  No, Stove Top Stuffing IS NOT in this recipe.  It’s a casserole we make…on the stove…when we’re lazy.

Those that can, do.  Those that can do, get overloaded with work.  LOL  I’m one of those over achieving can do-ers.  I mean, even in retirement my parents are still “working” to some extent.  We just do…work…well.  My 6 month review was nothing but glowing praise!!  I shined in Bogota.  I have stepped up and taken on MANY responsibilities and tried to delegate some, too.  And have tried to train the other BAs to step up and do what their customers need them to do.  Some have taken to it.  Others…well let’s just leave that topic for another day.

Where was I going with this?  Oh yeah!  Well that huge project that I was working on?  It’s been submitted this week.  And there’s a meeting next week to review it with those that have the ability to say yes we can or no what the hell were we thinking?  LOL  It was like a weight has been lifted, for the time being anyway.  So, this week has kind of been a struggle with the cooking as I have been DOG TIRED!  BUT, cook I/we did.  And made some yummy stuff in the process.

I had intended to make Tuna Romanoff, my way of course.  That didn’t happen, obviously.  Instead, we made Tuna Romanoff Casserole S’s way; on the stove.  It’s quick, hearty, and tasty.

Continue to saute those until they are nice and tender.  While the vegetables are cooking, put a pot of water on to boil for some egg noodles.  We actually use no yolk noodles.

S was cooking while I was taking pictures and being the sous chef.  🙂  Once the vegetables are tender, add one to one and a half cans of cream of mushroom soup, about 1/2 to 2/3 of a soup can filled with 1% low fat milk, and 3 cans of tuna in water that have been drained.

Heh.  I was trying to get some motion shots of S stirring the pot.  He added about 2 cups of frozen peas that have been steamed in the microwave.  We don’t usually add that many, but he wanted to some extra peas.

Then we drained and added one jar of diced pimentos.  I never would have added them to tuna casserole had it not been for the tuna romanoff recipe that I started making a few years ago.  I love the color and they add an interesting flavor.

Motion shot.  *snort*  Once that’s all stirred in, then you add about 1/2 cup of Parmesan cheese, grated and 1 tablespoon of dried dill.  Dill?  Yup!  Dill!  I am starting to associate dill with Eastern European dishes.  Like Chicken Kyiv?  It has dill in it.  And this?  Tuna ROMANOFF?  Get the picture?

S had already put the cheese in and stirred it all in when I started to take a picture.  He said, “Wait let me put some on top so you can see it.”  Me, “Any excuse to add more cheese, huh?”  S, “Yup!”  LOL  But seriously.  Who doesn’t love cheese?  Who wouldn’t jump at the excuse to add just a little more cheese to the pot?  *raises hand*  I would!

By this time, your noodles should be done.  Drain and add to the tuna mixture.

Once it’s completely combine, let it set a few minutes to allow the noodles to soak up some of that mushroom soup-y goodness.  At this point, you could put it in a casserole dish, top with bread crumbs and more cheese, and bake until golden.  We didn’t do that.  We dished it up and ate it as it.  It was still delicious and a perfect, easy meal for a long day.

Make this stove top version of the traditional tuna noodle casserole on days when you don't really want to turn the oven on.  This Stove Top Tuna Casserole has all the flavor, but requires no oven!