A mashup of Tex-Mex flavors combined with the quick and easy stir-fry style of Asian cuisine.  This Tex Mex Stir Fry is hubby approved and I’m sure it will be kid approved with your family, too! 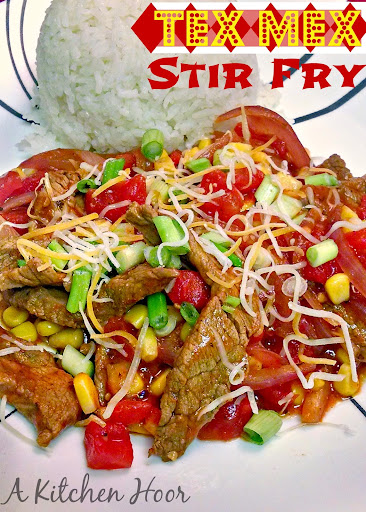 I keep seeing all these outrageous food inventions.  The brookie.  A brownie cookie.  Cheesecake cake.  A pie baked inside a cake.  Pake?  Cie?  What in the world would you call that??  I guess everyone’s just trying to one up each other and stand out.  *shrugs*

So, I’m going to invent a Cheescrownookie.

It’s the Turducken of desserts.  A cookie bottom, lined with a brownie, then topped with cheesecake, and finally a cake layer on top.  Coobrowcheescakecake just didn’t sound right.  Cheescrownookie sounds better.  And I think I’ll top it with a cupcake, just to be on the safe side.

I poke fun, but I really do LOVE reading those blogs and seeing what combinations and recipes they will come up with next.  Who knows?  Maybe I will invent the cheescrownookie.  *shrugs*

The cronut?  Not sure about that one.  I mean, it sounds interesting and good, but it just doesn’t look that way.  No matter what you top it with.  Brownie topped cookies?  Yeah, I can see that.  Cheesecake with cake?  Nah.  Too rich.  A pie in a cake?  Oh…hells no!  Seriously?  It’s just a mess and has #fail written ALL over it.  And a triple decker one?

Even my inner heffer is screaming hells no.

But this?  This is delish.  Even S said so.  He said we could have this again anytime I wanted to make it.  And even listed off some variations we could do.  Now THAT I found interesting.  I don’t think he’s actually said that about anything I’ve made… EVER.  But this he did.  And he’s right.  It was FAN-tastic!

It was supposed to have green bell peppers.  I failed on that one.  I was a little over zealous with the green peppers for our #MeatlessMonday pizzas.  Yeah.  You’ll see at least one of those on Monday.  We made two. They were goooooood, too!!

I guess they were a bit small or something?  Maybe I should have bought three?  I thought I had purchased some frozen peppers and onions for this one, but didn’t.  I purchased veggies for the #fail that was a soup I made Thursday.  It will make the wall of shame.  That’s for sure.  You won’t see it yet.  I need a few more fails before I throw one of those posts together.  It was tasty.  Just not hoor worthy.

Why isn’t this just fajitas?

Because it’s not.  The meat isn’t broiled.  It’s not even pan roasted.  It’s fried.  Stir fried.  There aren’t any tortillas.  Just rice.  Oh how I love rice.  Any and all rice.  Plain rice, flavored rice, risotto.  ALL rice.  Sometimes I eat it nekkid.  Seriously.  With nothing on it.  Not even salt and pepper.  I just love the flavor of rice.

But, this has plenty of flavor without the added salt.  The tomatoes and the enchilada sauce will have some.  I did add garlic salt.  It just needed a little and the garlic salt makes it not just plain salty.  It’s that little added layer of flavor that finishes the dish.  And this one will be finished on no time!!  A perfectly tasty, weeknight meal.