Just that little bit of flour dusted on the potatoes between layers makes these perfect!!  Thick and Creamy Au Gratin Potatoes are rich with that deliciously salty Gruyere goodness!! 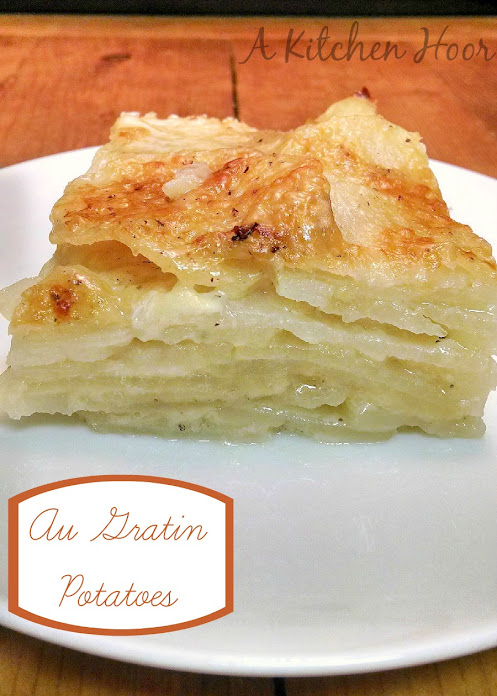 I know I’ve made these before.  But this recipe is different.  Just look at how pretty they came out!  How could I NOT blog about this.  It’s not exactly the same as the other recipe.  There’s a twist to this one that ensures rich and creamy potatoes with the tasty cheesy goodness we’ve all come to know and love!

This weekend, we did this:

and we saw this:

Granted, I was on my phone, too, but NOT DURING PLAY!  Seriously?  At one point, the people you see there AND the two sitting next to me were on their phone WHILE THE GAME WAS GOING ON!!  Are we THAT plugged in that we can’t leave them for a minute without texting, tweeting, facebooking, instagramming?  It’s just crazy.  For once in your life people, put it down.

Sunday supper was ribeyes (YUM!), these potatoes and some zucchini made in our new pans.  You’re going to see them intro next #MeatlessMonday.  They’re still in the experimental phase, but I’m going to try to integrate them into our regular recipes and meals.  We will be using them today for chicken Caesar and probably will use them Wednesday for the pork stir fry.  Not a conventional one, mind you.

But I’m getting off track again…these potatoes.  You see, every time I make them from scratch or even from a box, they’re always runny.  Too much sauce.  Even in the pre-packaged ones if you follow it to a T there’s still too much juice.  Even after letting them sit.  Well, I had a little experiment this weekend to try to prevent that.

Make a bechemel in the casserole dish.  “Huh?” you say?  Well, I decided I was going to sprinkle a little bit of flour between a few of the potato layers to try to thicken some of that milk.  Yes.  I’ve tried less milk.  The potatoes wound up being more roasted than braised.  They were okay, but not cheesy, creamy goodness I was hoping for.  But this recipe?  TOTES creamy cheesy goodness!

Do you see any excess milk in that pan?  Nope!  Just that little bit of flour to dusted on the potatoes and voila!  Thick and rich potatoes with that deliciously salty Gruyere goodness!!  *drooling*  And no, you can’t even taste that tiny amount of flour.  Try it for yourself and see how it works!