Wicked Witch Icebox Cake is as green as the wicked witch, but tastes deliciously sweet and is full of pistachio flavor. It’s a quick and easy dessert to whip up for your Halloween parties. 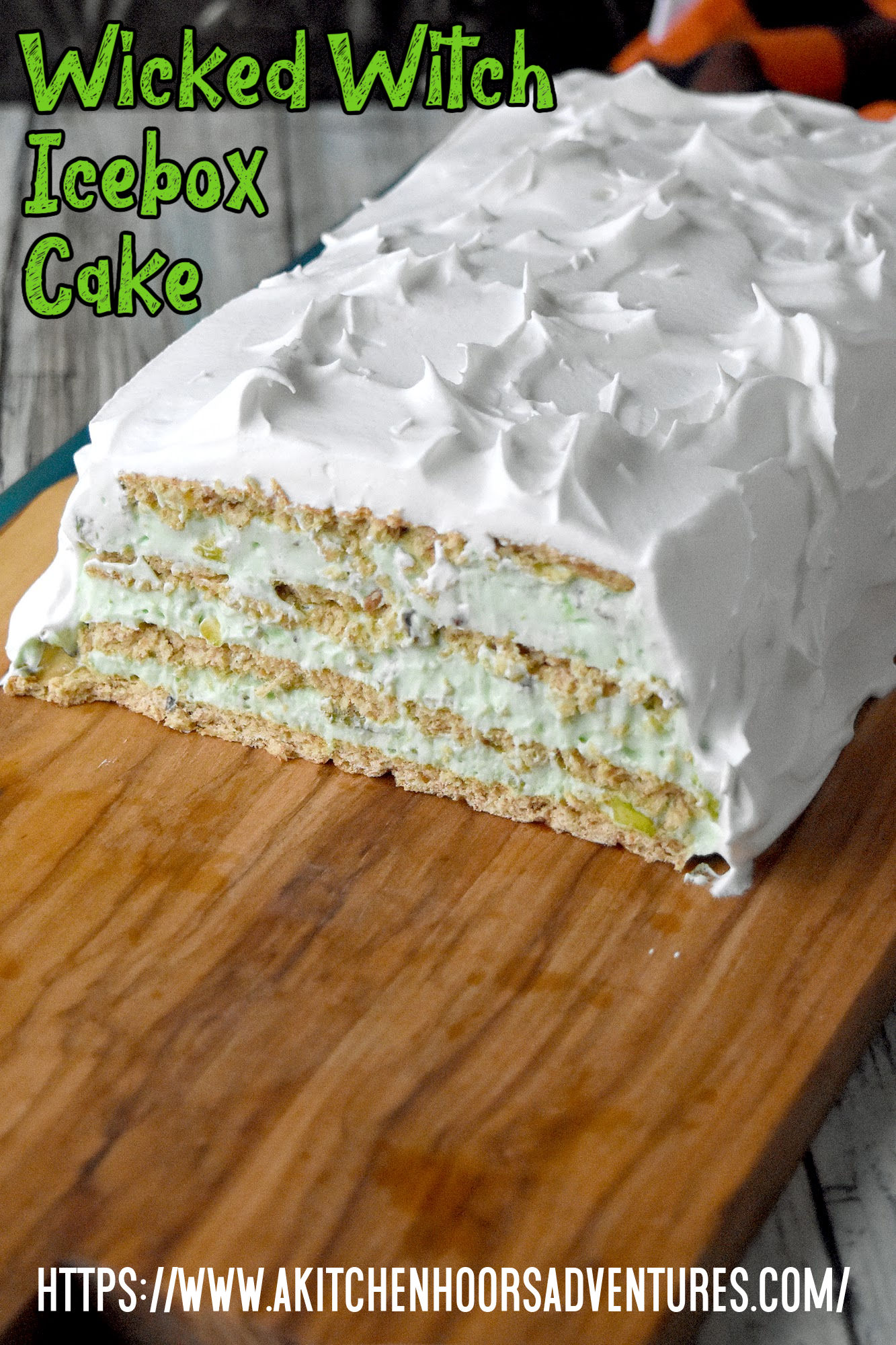 I put this no bake cake together and the hubs asked about it. I told him it was for #HalloweenSweetsWeek. He says, “But the wicked witch is not Halloween.” Okay. Yes, they usually play the Wizard of Oz for either Thanksgiving or Easter. And the Wizard of Oz released in August of 1939. But you cannot argue against green witches, flying monkeys, and magic shoes being Halloween like. And besides Halloween and witches definitely go together.

Why are witches associated with Halloween?

It’s not for the obvious reason that you think. They’re scary and all things scary are part of Halloween. It’s a sordid history that starts with the Druids. Then the Christians put their spin on things. And then there’s the hysteria of the Salem Witch Trials. It’s a whole series of unfortunately events for “witches” in history.

The Druids believed that Halloween, or as they called it Samhain, was a special night where the space between the living and spirit world was thinnest. This allowed spirits among other things to pass into the world of the living and run amok. They also believe that those who did bad deeds turned into cats.

When the Romans took over everything, they confused the mystics of the Druids with evil. Meaning, they turned the witches of the Druids and Celts into evil devil worshipping hags. If they had only taken the time to understand things a little better before jumping to conclusions, they might not have tagged the Druid witches as evil beings but spiritual beings.

Witch hunts fed the fear and made them even more evil.

The Church had no place for women in the old days. They didn’t fit in the hierarchy of the church. Another reason to make the Druid witches evil. And to solidify this the Church said that these witches made a pact with the Devil and must be eradicated. Of course, these witch hunts occurred in areas with the most political and religious turmoil. Convenient, right?

Colonists shared the same views as their homeland. They also deemed witches as evil and had their own witch trials. They started because teenagers asked a slave to tell their fortunes. I guess they didn’t like what they heard and pointed the finger at her calling her a witch. Then it was a free for all of everyone pointing the finger at everyone they didn’t like. The accusers claimed the witches, aka neighbors, cursed them and gave them illnesses. It’s one popularity contest after another, which is how I see it. A stupid reason to hang people, but that’s because I’m smarter than they were.

When did Halloween become a festive event and not a scary one?

We can also thank the Christians for that one. They initially had All Saint’s Day May 13 which celebrated those who died for their beliefs. However, in the 700’s Pop Gregory moved the All Hallow’s feast moved to November 1 in, what some believe to be, an attempt to assimilate the Celtic Samhain festival.

This meant that the night before became All Hallow’s Eve or Hallows Eve. That’s a mouthful. So it was change to Hallowe’en and eventually Halloween. In the short of it, that’s how Halloween comes into being as a festive day.  And the perfect day to make this Wicked Witch Icebox Cake! How did Halloween come to the States?

We can thank immigration for that one. In the 19th century, a large number of Irish immigrants came to America fleeing whatever famine, political issues, and civil wars happening in Ireland. They brought their customs of lighting bonfires to protect themselves against the spirits that crossed realms. They also dressed in costumes or disguises to keep the spirits away, too. Sound familiar?

The Irish also brought the jack-o-lantern with them. I talked about the theory behind that in this post. The Irish used to go house to house asking for food, kindling or wood for fires, and money. All of which they used to celebrate Halloween.

Snap apple is another one. We bob for apples, but originally it was an apple tied to a string. The kid that took the biggest bite won. Apples are also associated with fertility, so the legend of the first one getting a bite will marry first. And girls would put the apple they bit while bobbing under their pillow will dream of their husband. I know. It’s a bit far-fetched.

In the late 1800’s, there was a shift of mindset to make Halloween more about community and neighborhood gatherings. Parties for both adults and children were popular. There was even a campaign in the papers that encouraged people to remove the grotesque and scary elements from their Halloween festivities. This change in mindset made Halloween lose most of its superstitious or Celtic spiritualism. It forever changed it to be more like the Halloween of today.

Nothing creepy. That’s for sure. The fun thing about this recipe is the pistachio pudding. I always thought pistachio pudding was weird growing up. But the older the I get the more I appreciate its flavor and color. I mean, it’s super fun and bright green! And tastes like pistachios! I used the pudding in these Wicked Witch Popsicles that were super delicious and fun, too.

Just look at those fun layers of green pistachio goodness!! The crackers absorb the moisture in the pudding. This turns them into a cake like consistency. Hence the icebox cake name. But I’ve talked about that in this post for Icebox Mocha Cake.

I thought I had some fun Halloween sprinkles but couldn’t find them. It would be fun to sprinkle the cake with purple, green, and black sprinkles before serving the cake. That would make this cake totally Halloween. And for those that don’t know, purple and green are more pleasing for kids to see so they’re associated with Halloween for their sake. Just a final tidbit of Halloween fun for you.

Wicked Witch Icebox Cake is as green as the wicked witch, but tastes deliciously sweet and is full of pistachio flavor. It’s a quick and easy dessert to whip up for your Halloween parties.

#HalloweenTreatsWeek is a yearly Halloween blogging event that is hosted by Angie from Big Bear’s Wife . This event is an online, week-long event that is filled with some amazingly wicked Halloween treats and recipes from some fantastic Halloween loving bloggers!

Make Sure to check out all of the fun Halloween recipes that we’re sharing this week!

Check out all of these great #HalloweenTreatsWeek recipes for today