Wild Rice and Sprouts Pilaf is the perfect side dish to any holiday meal. Any meal for that matter. With long grain and wild rice simmered with Brussels sprouts and thick cut bacon, it’s a side dish your family will love! It’s the last day of #HolidaySideDishes! I hope you all have enjoyed the recipes we shared this week. I know I have. Especially mine, but that’s because I’m biased.

When I was growing up, we tried to make as much as we could from scratch. People look at me like I’m crazy when I say I didn’t have hamburger helper or premade rice mixes until I was in college. At least not that I can remember. 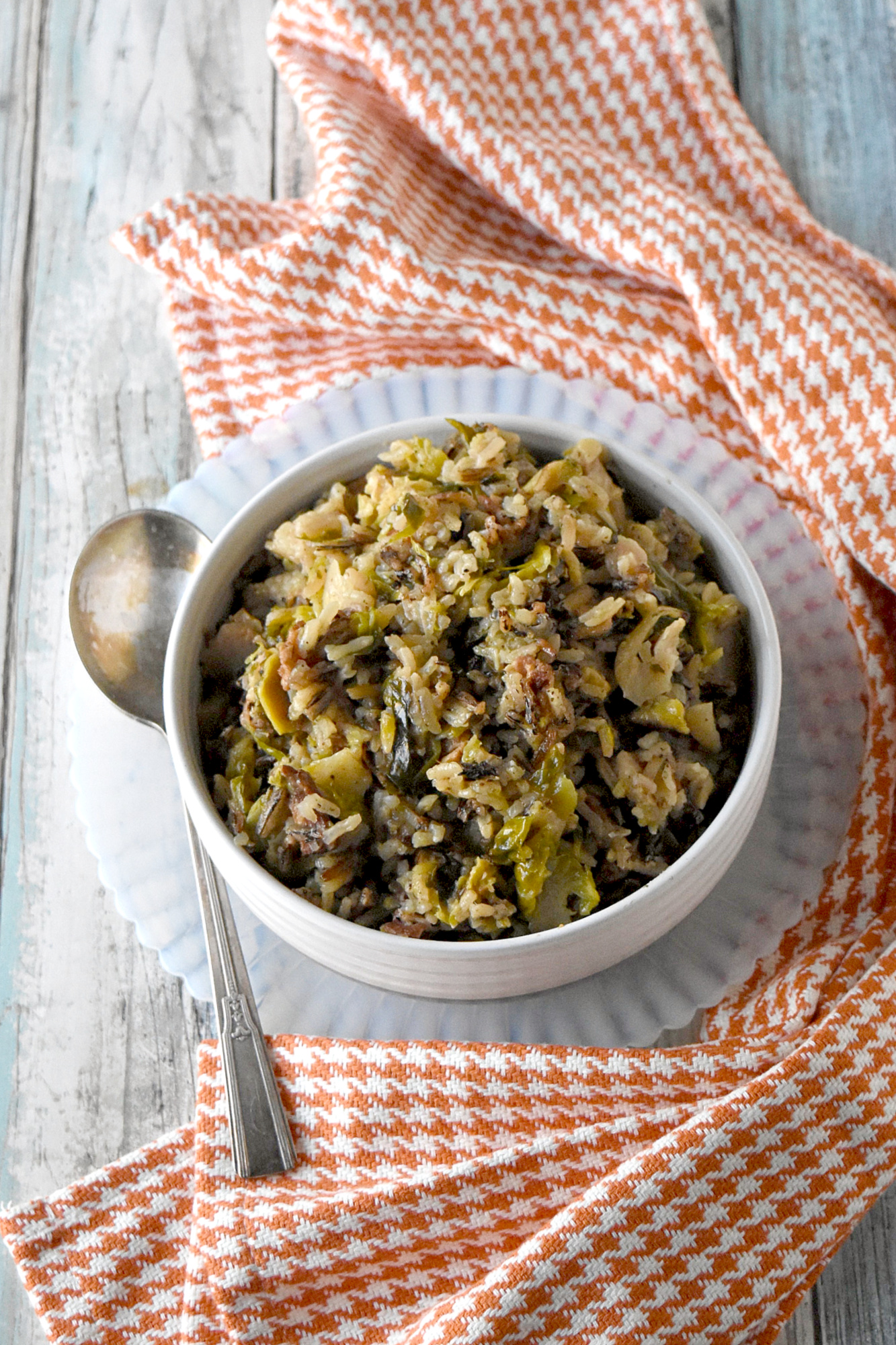 And the blue box macaroni and cheese?

Rarely if ever. Because the homemade rice pilaf and macaroni and cheese we made was way better. It beat the pants off all those premade mixes and boxed dinners. Besides, it didn’t have as much salt and other extra fake stuff in it and that the pre-made box mixes do. So, we all know that’s healthier.

So, while some people were pulling out a box of rice mix, I was pulling out pieces of vermicelli from the bottom of the box. As I was doing that, Dad would sauté some onions. We would get some garlic, make some chicken broth using some bullion, and heat up a pan. Most rice pilaf recipes follow pretty much the same pattern if you will. You sauté some aromatics in a pan. This can be onions, vegetables, meats. Pretty much anything that you want to flavor the rice pilaf with.

In this case I started with some delicious thick cut bacon.

I put that in the pan to crisp up. Then I added the Brussels sprouts. Once the aromatics begin to soften then it’s time to add the rice and pasta. Except I did not use pasta in this recipe. I had wild rice instead. When you cook the rice, you’ll notice that it will change to a whiter color than its usual color. I tried to find out why it does this, but I didn’t have much luck. If you happen to find out, please let me know in a comment. Once the rice has turned white and the pasta, if you’re using it, is a golden brown then it’s time to add the broth. You add the broth with any herbs or spices you plan on using.

I typically shy away from adding salt and pepper now. I’m very sensitive to salt. using a premade broth or broth concentrate typically adds enough salt for my taste. but I do check for flavor before I serve it and that’s what I want to add extra salt if needed. So, about the wild rice.

Every time we go to the Minnesota State Fair, my stepfather goes through the discount books that they buy and finds the great deals. He’s really good at finding the great deals. There is no question about that. I can only guess that Minnesota has a cornerstone of US production on wild rice. But don’t quote me on that one. I’d have to look that up and I don’t want you right now. Maybe when I get around to cooking the regular wild rice then I will talk about Minnesota and it’s wild rice directions.

If you don’t know wild rice is not actually rice.

It’s actually the grain of a grass. Yes, wild rice is actually grass seed. Wild rice is typically a delicacy in the United States there is a a wild rice species in China.

But they don’t eat the rice as much as we do. They take the grass stock and cut it up as a vegetable and eat that instead of the grain that we eat. It’s surprising how much nutrition is in weeds and grasses that grow in Wetland areas.

Surprisingly enough the cat tail has an enormous amount of nutrition in it. They were even planning on using it to feed soldiers in World War II right before it ended. You can eat the rhizomes, which are the outbound roots of the plant as it is trying to regenerate itself. You can eat the stalk and the interior stalk like a bamboo shoot. You can even eat the cat tail itself called the corn as it is forming. I only know this because we have a few cattails in the area, and someone sent me a book about foraging for your food.

Hopefully you will not have to forage for your wild rice because after seeing how delicious this bowl of wild rice and sprouts pilaf looks, you will want to make some.  If you don’t have or can’t find quick cooking wild rice, there’s notes in the recipe for making wild rice in the pressure cooker and on the stove.

*If you do not have quick cooking wild rice, then you can make some before hand and stir in at the end.

Stove top:
Bring 3 cups of water to a boil. Stir in 1 cup of rinsed wild rice and simmer 40 to 45 minutes or until the rice is tender and chewy. Strain any remaining liquid before stirring into the pilaf.