Zimtstern are super simple to make and taste completely amazing!  The nut meal and cinnamon in a meringue cookie is deliciously light.

This recipe is sponsored by Millican Pecan. All opinions are my own. Thanks for supporting the brands that make A Kitchen Hoor’s Adventures possible.

Every year for this event, I try to find a recipe that pays homage to my roots. Last year I did a good job, I think. I found some delicious Irish, English, and Norwegian cookies. This year, I found these delicious German cookies.

So, I’m reading many recipes about how these cookies are made. And I’m thinking, “This sounds a lot like a macaron, but not.” It starts with a meringue but made with powdered sugar instead of granulated. Then you add nut meals to the meringue, but without any more powdered sugar. And instead of piping these, you cut them out. You can see the similarities and the differences.

I have this habit of just reading the ingredients and putting them together the way I think they go. And I sort of did that with these, and sort of didn’t. I did not read any of the recipes comment on how thick the batter gets. It gets thick. Super thick and when you add the nut meals and rest of the ingredients it’s more of a fold and press to get everything to combine.

I did read that this dough is sticky, but I didn’t think about how sticky it is. It has no flour in there at all so there’s nothing to really bind the egg white and the nuts. Except your efforts to combine them as noted in the previous paragraph.

Now, as much as I enjoyed eating these, they are the messiest cookies I’ve ever made. Seriously. I had powdered sugar EVERYWHERE! Don’t say I didn’t warn you. And I did use a work surface sheet to roll them out and try to keep things clean.

However, I made the mistake of turning the sheet over and peeling the dough off the bottom that is now the top. Even though I folded the edges over to try to keep all the powdered sugar encased, there’s just no encasing it. I see y’all shaking your head in agreement.

The hubs was wondering why I was in the kitchen giggling my head off. Every time a cloud of powdered sugar would surface, I just had to laugh. There’s no point in getting upset. You just clean the messes up when you’re finished. And that’s what I did. Cleaned the floor and counter up when I finished making these. Heck, I even rolled the dough out again after cutting it because, well, the mess was already made.

I was committed to making these and enjoying them. Actually, it was more like, “I’m going to jump in with both feet and make these even though I have no idea how they’re going to turn out.” Do you ever do that? Just jump in and make something without having a clue what they taste like or how they’ll turn out? I was like that with macaron and did that with these, too.

They look like regular cinnamon cookies, but they’re not. They’re meringue cookies so they’re light and airy. Then they have the hint of cinnamon flavor and the nut flavor combined. There German cinnamon stars are completely delightful!

You think zimtstern are going to be delicate because of the meringue, but they’re surprisingly sturdy. I put them in a bag with a few of the hermit cookies and they didn’t break at all. That bag went into my lunch box, tossed in the car, and slung onto my back to talk to work. I thought for sure they would be busted by then, but they didn’t even chip or crack.

Some recipes have them topped with royal icing or some sort of glaze. If you’re not new here you know how I feel about that. I’m not a huge glaze fan. And I’m definitely not a huge icing fan. I would eat cake without icing and have when I make it at home.

But if you want to put icing on them, have at it! They’re your cookies now.

I split the difference with the almond meal and the pecan meal, but you can use all almond meal if you’d like. Or split the almond with hazelnut or other nut meal you have on hand. I don’t know that I would try coconut flour in these. Though I can’t imagine it would cause a different result if you did. I’m just brainstorming other meals to put in these cookies in case you don’t have almond meal or other nut meals on hand. I would at least keep it mostly almond meal which is readily available in almost every grocery store here.

And if you don’t have almonds or pecans you can easily make some. I would stick them in the freezer for about an hour before processing them in your food processor. I wouldn’t use a blender. It might turn into butter instead of meal. Which is why I suggest putting them in the freezer first. It will solidify the fats in there and hopefully keep the nuts from becoming butter.

Zimtstern are so simple yet so delicious. As much talking as I did about rolling these babies out, they’re still pretty simple to make. I do not have a lot of rolling expertise and it showed when I rolled these out. It’s sugar, eggs, and nuts. You can’t get simpler than that. Not to mention that these are gluten free! And can easily be made vegan with some aquafaba.

I love when a recipe has few ingredients but tastes amazing. And sparks the creative process to morph or change it into something that is truly your own. Maybe try some ginger in there instead of cinnamon. Or some cardamom! Granted, those are probably different named cookies.

Welcome to #ChristmasCookies week where more than 25 bloggers are sharing cookie recipes perfect for your holiday celebrations. Hosted by Ellen from Family Around the Table, Christie from A Kitchen Hoor’s Adventures and Heather from Hezzi-D’s Books and Cooks, we invite you to not only check out the recipes but enter the amazing giveaway. 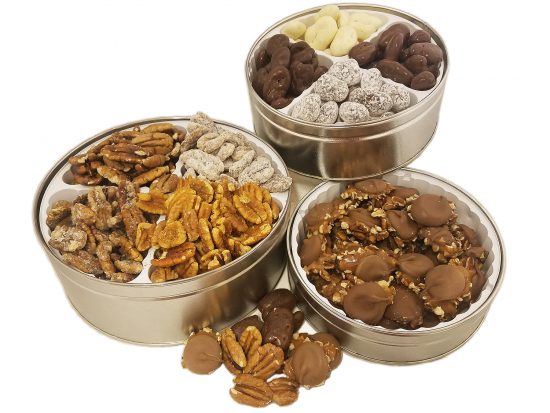 Originally founded as the West Texas Pecan Nursery in the late 1800’s, Millican Pecan is now in 5th generation ownership. Located in San Saba, TX, the family continues the tradition of pecan farming while also branching the business into the online world. The family also enjoys educating people about pecans. One winner will receive The Tower of Treats Gift Tins. The tower includes 3 decorative gift tins stacked on top of each other. The bottom tin includes our 2 lb. Chocolate Pecan Sampler, the middle tin is our Flavored Pecan Sampler and the top tin is an 8 oz. tin of Milk Chocolate Caramillicans (similar to Turtles). An $80 value.

Prize 2: An Assortment of Flavored Extracts from Adams Extract and Spices

In January 2013, Adams, one of the oldest continuously operated companies in Texas and one of oldest spice and extract companies in the United States, celebrated its 125th birthday and was awarded the Texas Treasure Business Award, an award sponsored by State Bill 920 that recognizes the accomplishments of Texas businesses that have provided employment opportunities and support to the state’s economy for at least 50 years and pays tribute to the state’s well-established businesses and their exceptional historical contributions toward the state’s economic growth and prosperity.

Prize 3: A Set of Baking Pans from Anolon 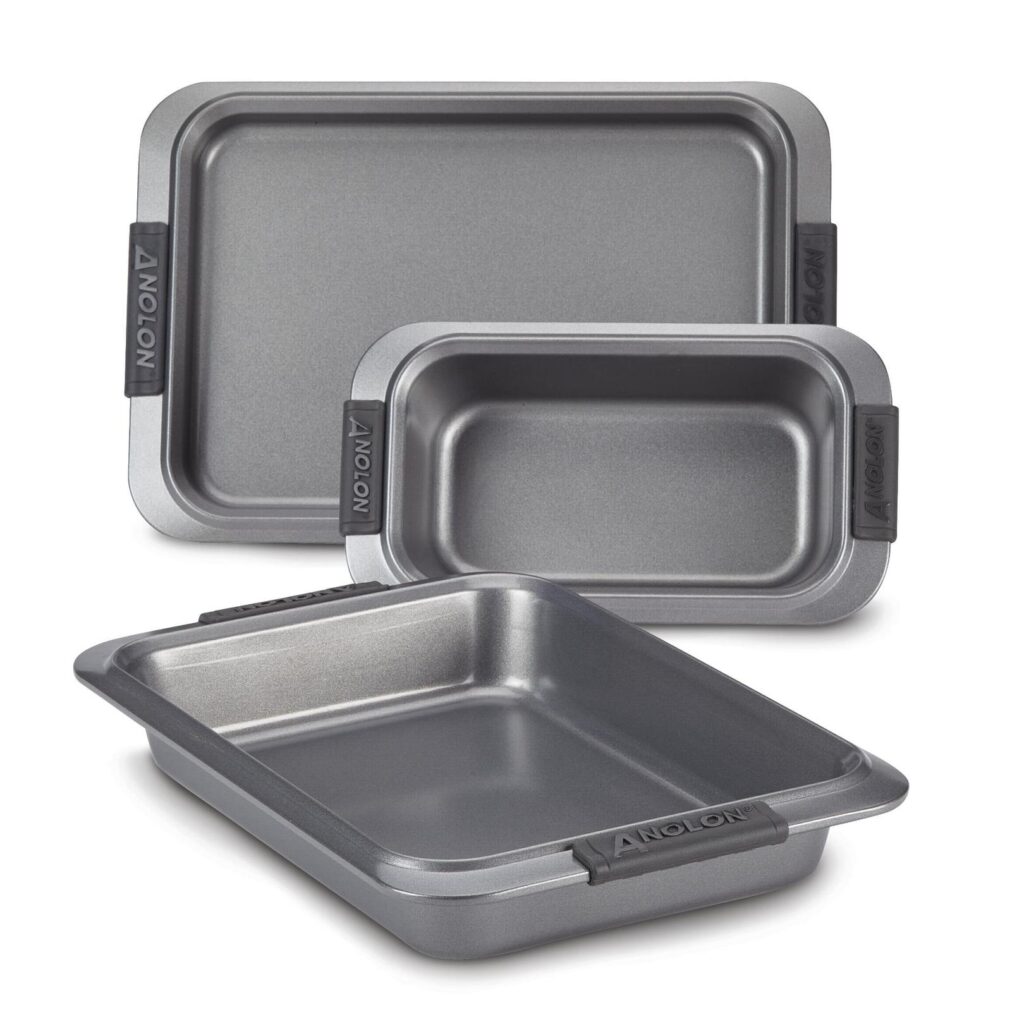 Established in the 1950’s, Meyer Manufacturing started by making and selling flashlights. In 1971 they started their journey into selling cookware. By 1986 they released the world’s first hard-anodized nonstick cookware which revolutionized the world of home cooking. Their nonstick surface didn’t flake or scratch easily.

Today they sell bakeware with nonstick interior and exterior made with a special sapphire-reinforced blend that is triple coated. NOTE: Color may vary from the photo above.

Founded in 2010 by Shannon Harvey out of an industry need for bold, bright cupcake liners and baking supplies that are the life of the party! Based in Louisiana, Sweets & Treats is a designer cupcake liner manufacturer and party supply company that creates exclusive greaseproof cupcake liners, sprinkles, sprinkle mixes, paper straws, and other baking supplies.

Four (4) winners will be selected. The prize packages will be sent directly from the giveaway sponsors. Bloggers are not responsible for prize fulfillment. Winners have 24 hours to respond once notified by email, or they forfeit the prize and an alternate winner will be chosen. The #ChristmasCookies bloggers are not responsible for the fulfillment or delivery of the prize packages.

Bloggers hosting this giveaway and their immediate family members living in the household cannot enter or win the giveaway. Entries will be verified. No purchase necessary. Void where prohibited by law. Giveaway open to US Residents only who are 18 years of age or older to enter giveaway. This promotion is in no way sponsored, endorsed, administered by, or associated with Facebook, Instagram, Pinterest, Twitter or any other social channel mentioned in the #ChristmasCookies posts or entry.